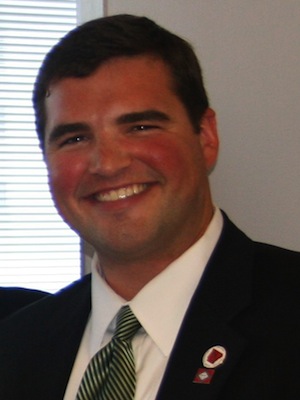 He graduated from the University of Arkansas in 2007 with a degree in political science.

About 18 months later, the Fort Smith native landed a job as the executive director of the Arkansas Osteopathic Medical Association in Little Rock, calling it a perfect marriage of his two loves.

An osteopathic physician is a fully qualified physician licensed to prescribe medication and perform surgery. An osteopath, however, focuses on preventive health care.

Since becoming executive director in November 2008, Edwards has increased the membership from 70 to about 140. His goal is to get 200 members by the end of the year. There are 300 osteopathic doctors licensed in Arkansas.

Edwards’ other duties for the organization include writing grants, producing its first quarterly publication and lobbying. Edwards said he thinks he is the youngest registered lobbyist in Arkansas.

Away from the organization, Edwards serves on various committees, including the dean’s advisory council of William Carey College of Osteopathic Medicine of Biloxi, Miss.

He said he was brought up to serve people and plans to go on a mission trip with his church, Immanuel Baptist Church in Little Rock.