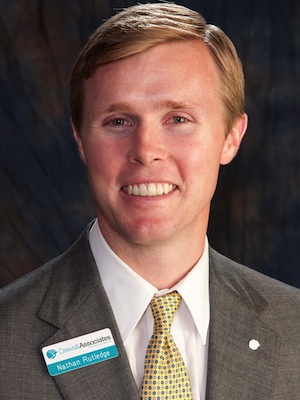 Nathan Rutledge, 28
Vice President, Capital Markets Group
Crews & Associates
Little Rock
If you suspect Reynie Rutledge, CEO of First Security Bancorp, prepared his boys to enter the family business by drilling interest spreads and bond yields into their little heads from the time they sat in highchairs, you’d be wrong.

“He’s pretty close to the vest,” says Nathan Rutledge, the youngest of the three sons. “He works hard and then comes home.”

Sports, not business, were paramount when there were boys in the Rutledges’ Searcy home, especially soccer and golf. So Nathan’s original dream was to become a professional soccer player. “But that didn’t quite work out,” he said.

Not until it came time to choose a college did his father start discussing career paths — and then only to recommend the University of Arkansas if Nathan thought he wanted to go into business in Arkansas. And like his older brothers, John and Adam, that’s what Nathan did, for both his bachelor’s degree and law school.

Unlike his brothers, who joined First Security Bank, Nathan joined the holding company’s bond house, Crews & Associates of Little Rock. And there, as vice president in the Capital Markets Group, he is working directly with municipalities in Arkansas and surrounding states that need to issue bonds.

Away from the office, Rutledge is a member of the Little Rock Rotary Club and has raised money for Arkansas Children’s Hospital and Habitat for Humanity of Pulaski County. Earlier this month, he was among Little Rock’s 25 Finest Young Professionals honored at a fundraiser by the Arkansas chapter of the Cystic Fibrosis Foundation.