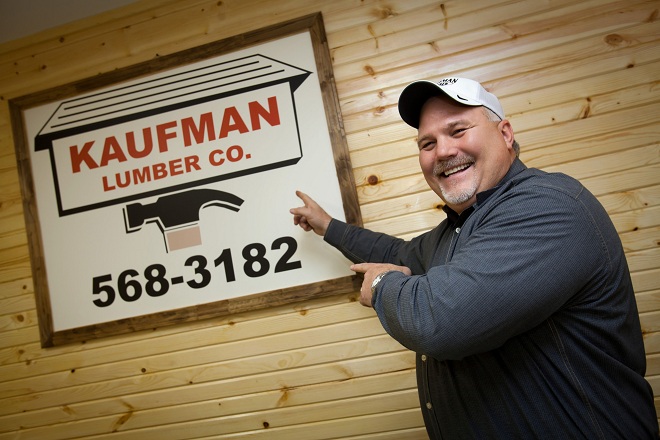 There were nearly two dozen lumber companies in the market when Joe and Mary Kaufman started the business back in 1952. That number has dwindled to a handful over the years.

"We're a survivor," Joe Kaufman observed when he retired in 1986 after selling the business to a pair of staffers: Bob and Jim Watkins.

The Watkins brothers exited the corporate picture three years later, and under the ownership of the Melvyn Bell family, Steve Wortman ascended to leadership first as a manager and later as a stockholder.

Sales totaled $8 million when Wortman joined Kaufman Lumber in 1985 as a forklift operator. Today, revenue tops $20 million, and the staff size has doubled to 60.

"Six guys have been with me in excess of 20 years, and one of those has been with the company for more than 35 years," Wortman said. "That is one of the main reasons that we are as successful as we are. It's our personnel, and it's a team effort."

Kaufman Lumber weathered the post-2008 housing market downturn in solid fashion thanks to a diversified clientele mix that extends beyond homebuilders to include state and local government agencies along with a healthy dose of walk-in customers.

Market consolidation brought a cadre of experienced sales staffers from National Home Center to the company in September 2010. The migration deepened the company's talent pool and brought a nice book of business to Kaufman Lumber.

"The pie didn't necessarily get bigger, but we got a bigger slice," Wortman said.

He cites three areas as a key to the company's longevity and success: 1) honesty, 2) economic logistical and geographical balance and 3) quality and ambitious personnel.

"We strive to provide a level of service, quality and competitive pricing that is unparalleled by our competition," Wortman said.