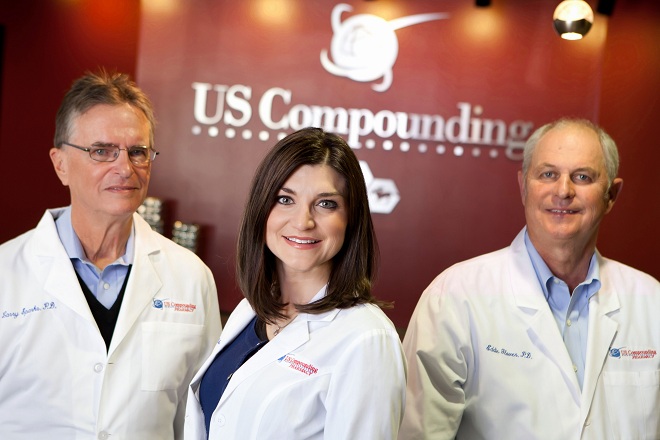 That growth bespeaks national demand for small batches of custom-made medications. The pharmacy makes custom orders of creams, capsules, eye drops, inhalants, IVs, injected medications and veterinary medicines that either must be customized for particular patients or that health care facilities need due to medicine shortages or other problems with ordering from a manufacturer.

The company's staff has expanded to meet the demand for compounded medications. U.S. Compounding had about eight full-time employees seven years ago and now employs 79 full-time workers, 12 of whom are pharmacists — 17 of them hired since November, when the company was selected as a finalist in Category 2. The company added a second shift in January.

"I am most proud of our growth, but not only growth, but that we have been able to grow with quality and good customer service in an atmosphere that I believe our employees enjoy working in," said Eddie Glover, the pharmacy's president and CEO.

Glover, a pharmacist, owns the company with his daughter, Kristen Riddle, and Larry Sparks. Riddle and Sparks are also pharmacists.

Glover had worked for 18 years as a staff pharmacist, but turned entrepreneur when he bought the Thriftway Pharmacy in Clinton (Van Buren County) in 1994. He began compounding medicines in 1996. Glover bought College Pharmacy in 1998. When he spun off U.S. Compounding from College Pharmacy in 2005, he turned his focus from retail pharmacy to the growing field of compounded medicine.

Glover wants to see U.S. Compounding double its business within the next seven years and stay in Conway.

"My long-term goal is that U.S. Compounding would continue to grow, to continue to change with the times, with the technology," Glover said.