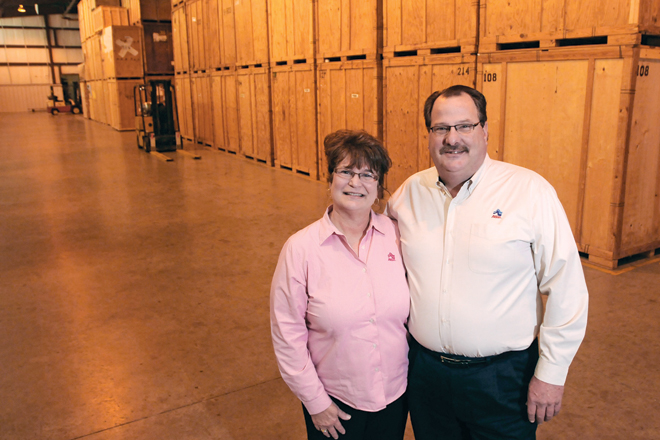 Winter Moving & Storage of Bentonville may be an authorized agent for a national van line, but it is still a family business.

Established in 1979, Winter Moving & Storage is a full-service moving company and authorized Atlas Van Lines agent that has carved out a niche relocating corporate employees while still providing quality service for its cash-on-delivery customers. The company's award-winning journey more or less began with a golf cart.

"It's just a business that I've always had a passion for," President John Winter said. "It's very people oriented."

Winter worked his way through college as an Atlas driver, and his father, Waldo, ran an Atlas operation while raising pigs and cattle on his farm in Nebraska.

Winter's parents had a house in pre-boom Bella Vista, and during a stay in the late 1970s, Waldo Winter stopped in to chat with Don Helmuth, owner of Helmuth Moving in Bentonville. Waldo only wanted to pay his respects to a fellow industry member, but Helmuth soon offered him a place to store his golf cart and in 1979 offered Waldo a chance to buy the company.

John Winter bought out his dad in 1986, and Winter Moving & Storage continued to thrive during the rapid growth of the northwest Arkansas area that led the company to build a 40,000-SF warehouse. An eight-employee, three-truck operation has grown into a 45-person, 43-truck business.

Winter Moving & Storage has used a personal touch — visiting customers in person rather than relying on the Internet — and accurate, honest pricing on its way to winning multiple quality and excellence awards from Atlas.

Winter praised his employees, many of them veterans of 12 years or more, for the success of the company.

"Our drivers, probably 30 percent of their job is driving the trucks," Winter said. "The rest of it is taking care of the customers."

A significant number of those employees are family, including Winter's wife, Joyce; son, Jacob; daughter and son-in-law, Amanda and Michael Crouch; and brother and sister-in-law, Wally and Peggy Winter.

"We've worked hand in hand through the good and bad times we've had over the years," Winter said.