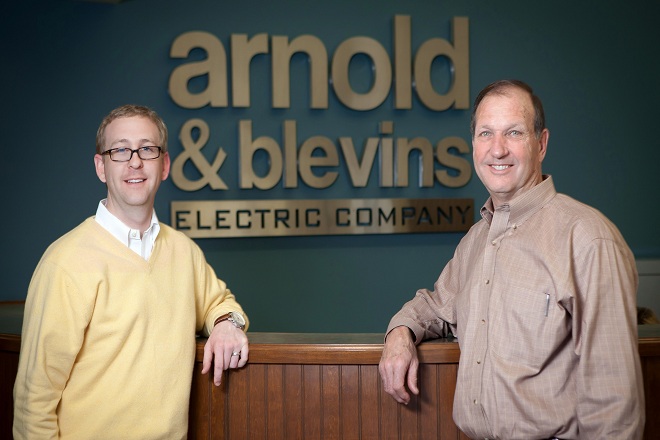 Arnold & Blevins Electric Co. started as a one-man shop before growing into one of the largest electrical contractors in Arkansas. The North Little Rock enterprise numbers 105 electricians among its staff of more than 120.

The firm was founded by L.T. Blevins in 1968 as a residential electrical contractor before expanding into light commercial work in 1974. Bill Arnold became a partner in 1976 and bought the company outright in 1992.

Today's electrical contracting firm coalesced in 1987 after the partners parted and rejoined after five years. Arnold remains as CEO and his son-in-law, Jonathan Rogers, serves as president.

"My job is to keep the ball rolling," said Rogers, 30, who has worked at the company since 2002. "We are in the service business. We provide people service. The only way we can get customers to come back and do business with us is to charge a fair price and do the job as fast as they expect it, and if there's any problems, we make it right."

The company continues its foundational, conservative approach to managing its money with an approach of "If we can't afford it, we don't buy it."

All these years later, Arnold & Blevins still operates on a cash basis with no debt and all bills paid by the 10th of the month. The company's fiscal conservatism doesn't impede rewarding its hardworking staffers with bonuses, an annual norm.

"There's not a lot of secrets," Rogers said. "We come to work early and stay late."

Examples of the company's handiwork can be found at the First Pentecostal complex in North Little Rock, in buildings dotting the Harding University campus in Searcy and new projects such as the Arcade Building and Mann on Main Building under construction in downtown Little Rock.