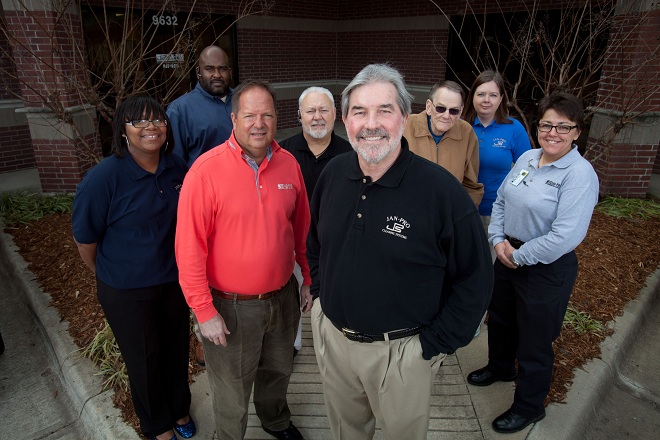 When old friends Dave Hughes and Mark Briggs decided to leave their respective careers behind and go into business together eight years ago, they had no idea what that business might be.

With open minds they narrowed their choices to a chain of hair salons or a Jan-Pro Cleaning Systems franchise.

Jan-Pro won and — 250-plus contracts later — the duo has no regrets.

"To me, all the hard work and heartache and wondering how it was all going to work out … it's all paid off," Briggs said.

"We're proud to be in the cleaning business, and we're proud that we've got a fair amount of high-profile accounts in the city and in central Arkansas," Hughes said.

Hughes, 54, and Briggs, 63, knew each other professionally and socially.

Briggs had been chief information officer for Quality Foods, which was purchased by Performance Food Group. Hughes was a former owner of Bank Business Forms and felt he was in a declining field.

Briggs was an experienced personnel manager and Hughes' background was sales and management. They wanted to combine their skills, and a franchise consultant recommended fast-growing Jan-Pro Cleaning Systems, which did not have an Arkansas franchise among its 85 master franchises.

"We went in with an open mind," Hughes said. "We narrowed it down to a couple of industries, one being a chain of hair salons and the other being Jan-Pro."

Since May 1, 2005, Jan-Pro of Arkansas has steadily acquired a series of large and small clients ranging from car dealerships to manufacturers to medical clinics to bank branches. There were early struggles and doubts, but Jan-Pro of Arkansas, in the smallest tier of the organization, is outperforming franchises in larger cities like Cleveland and Cincinnati.

Thoroughness and prompt, personal customer attention have given Jan-Pro an account loss rate of less than 1 percent, significantly lower than the industry national average.

"It makes me feel good that all the hard work we've put into it we're getting out of it," Briggs said.