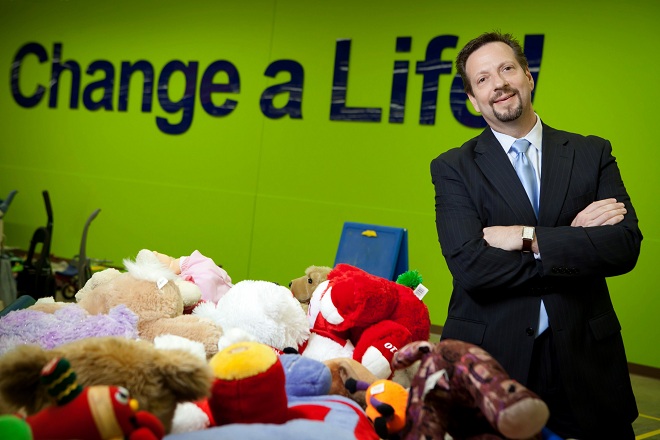 He began leading the organization in 2008, and since 2009 has opened 17 new locations of the nonprofit's retail outlets.

Goodwill provides free work training programs for the disabled, disadvantaged and for "anyone who's got something preventing them from getting a job," Itzkowitz said.

The organization operates stores that sell donated items and work training centers that provide career services. It has seen particular success with its transitional employment program for ex-offenders coming out of prison. Goodwill provides jobs, trains for jobs and helps connect people with jobs outside of Goodwill.

Goodwill's transitional employment program has a recidivism rate of less than 10 percent, which is much better than the state's average recidivism rate of 44 percent. "Just this past year, we started working directly in the prisons. So we get them connected before they get out," Itzkowitz said.

In 2008, Goodwill Industries of Arkansas provided 1,068 people with career services and placed 89 in jobs.

Twelve of Arkansas' 15 Goodwill career service centers have opened since Itzkowitz became president and CEO. In 2012, Goodwill helped 6,500 Arkansans with career services and placed 1,100 in jobs.

Under Itzkowitz's leadership "what we did in a year, we're able to do in a month," he said.

Next on Itzkowitz's agenda is starting a pilot job training program in central Arkansas for people diagnosed with autism.

Selling donated goods funds 96 percent of Goodwill's budget inArkansas. His desire is "making sure we're all good stewards of those things that come to us," Itzkowitz said.

Hence, another of his goals: making Goodwill Industries of Arkansas a zero-waste organization within the next five years. That means no donations go to a landfill, but are recycled if they can't be sold, he said.

Having a local board of directors means Goodwill in Arkansas can tackle "issues that organizationally we say are fairly big issues here in the community," Itzkowitz said.