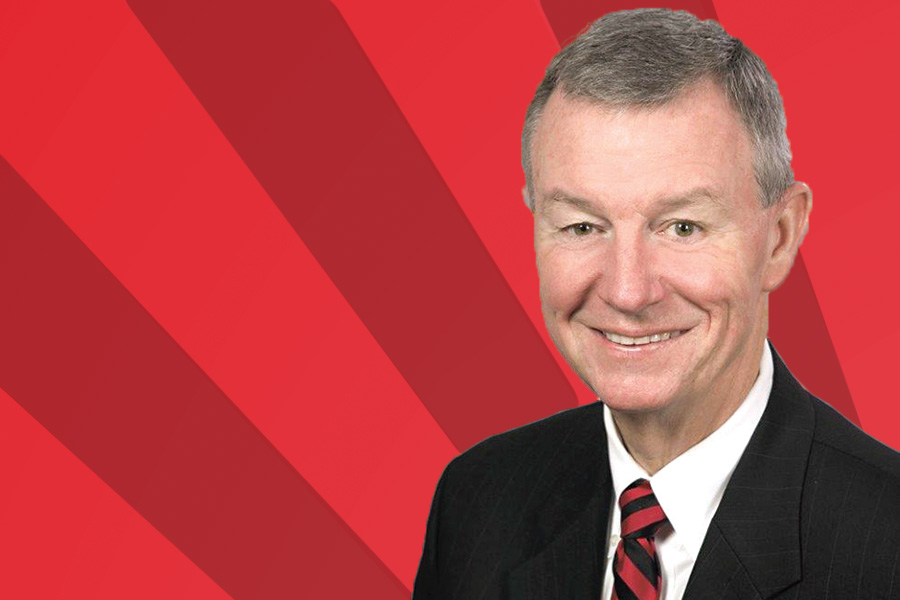 In his close to 50 years in banking, Tommy May has thrived on professional challenges.

And there have been plenty.

From the day-to-day responsibilities that come with leadership to new technologies to keeping up with the changes that accompany the rise of each new generation, May, a former Marine, has continued to adapt and overcome.

In the process May built the foundation upon which Simmons First National Corp. has grown its assets to $16.5 billion and expanded its presence into seven states. For this achievement and many more, May is the Arkansas Business of the Year Legacy of Leadership honoree.

May welcomed the honor but added that there are others he feels are just as deserving.

“They are all winners and I am proud to be on the same stage,” he said.

May retired in 2013, eight years after he was diagnosed with amyotrophic lateral sclerosis. He began his banking career at First National Bank of Commerce in New Orleans, but spent more than 30 years with Simmons.

As bank president and CEO of publicly traded Simmons First National Corp., Tommy May fought through recessions and hard times and stayed true to his values, which include loyalty to his adopted hometown of Pine Bluff.

“The bulk of my career has been in Pine Bluff and we both have many of our friends living here,” May said. “Pine Bluff is home and we decided we would retire here. Pine Bluff gets a lot of bad publicity, some deserved and some not. Regardless, it is a great place to live.”

Son Chad May, president of Armor Bank, attributed his father’s longevity and success in banking to following the “do-right rule” each day.

“The definition is that if you have to stop and decide whether something is right or wrong, then you probably should not do it,” Chad May said. “His career personally and professionally has been based on following the do-right rule and investing in the success of others. Both of these are pretty simple concepts and a good place to start each day.”

May was born in Prescott in 1946 and raised in El Dorado. He started school at the University of Arkansas, but, with an admitted nose for trouble, he was pulled from school by his father, who was unhappy with his grades.

May worked on a pipeline and then joined the Marines and served in psychological operations in Vietnam from 1967-70. He finished his bachelor’s degree at Arkansas and completed his master’s of business administration in 1972.

He worked in New Orleans and then for Exchange Bank and Exchange Bancshares Inc. in El Dorado until 1987, when Louis Ramsay persuaded May to come to Pine Bluff and join Simmons.

With May in charge, Simmons, founded in 1903, became a statewide and regional pillar of the industry while achieving national recognition for credit card services.

“One thing that never changed was our commitment to deliver quality customer service,” May said. “Despite all the changes in the industry, success is achieved by the quality and attitude of associates. I have tremendous pride in the men and women who made me look much better than I deserved.”

May is loyal to his alma mater and was a University of Arkansas trustee from 1993-2003. He even served an interim stint as university president because of an illness, said Armor Bank Chairman Mark Waldrip, a current UA trustee.

“He has set a standard for all of us in the banking sector to aspire to,” Waldrip said. “He has led a banking institution to the highest prominence in this state and has done so while adhering to the highest standards of business ethics.”

May is a member of the UA’s Arkansas Business Hall of Fame, has earned the hall’s Lifetime Achievement Award and has received the University of Arkansas Chancellor’s Medal.

He enjoys family time with his wife, Kathryn, whom he credits along with other family, friends and the Simmons employees and staff for providing the support he needed to get his life on course after his diagnosis.

“My wife did not allow much time for any ‘pity parties,’ so after a while, we turned it over to God and left it there,” May said. “Today, we use the challenge as an opportunity to make a difference. In some way we are being led. We continue to enjoy our kids and grandchildren, working in our community and finding ways to allow our faith to become an even greater priority in our lives.”