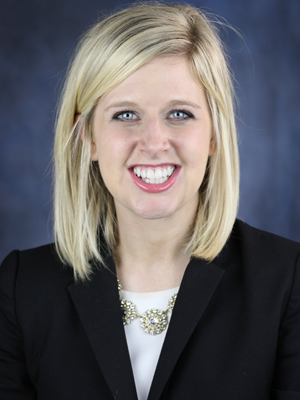 Dale Carnegie Training of the Midsouth

When Jessie Wilson first looked for a job at Dale Carnegie Training, it was simply because one of her mentors told her it would be a good fit.

Wilson, a 2009 alumna of Harding University, holds a degree in professional sales and has worked at Dale Carnegie Training of the Mid-South since January 2010. She fast-tracked through training and completed two years’ worth of instruction in a single year; her title now is performance consultant and certified trainer.

In 2011 and 2012, she was named rookie of the year for Dale Carnegie, and Wilson has placed in the top 50 for her sales collections every year.

“I want to be known as somebody who did her job to the best of her abilities but somebody who sees a bigger picture than herself,” Wilson said.

Wilson is president of the Rotaract Club of Little Rock, a club she has been a part of since it began five years ago. As vice president last year, she was able to go through Leadership Greater Little Rock.

“I really wanted to do that to continue to be involved in the community,” Wilson said. “I would say my awareness grew … but I also gained lifelong friends [who] really have inspired me to do more.”