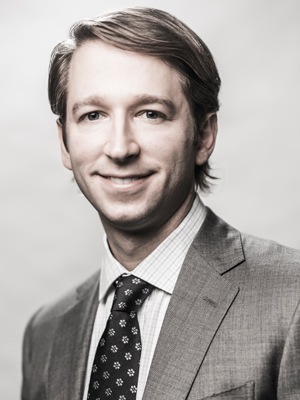 Carl George never wanted to do anything other than what he is doing right now. As a fourth-generation George at the privately owned poultry company George’s Inc., it might have seemed pre-ordained that George would follow in his father’s, grandfather’s and great-grandfather’s footsteps. Carl George started working at his family’s business when he was 14 and was named co-CEO and co-president in 2013.

George shares the leadership of the company with his fraternal twin brother, Charles, while their father, Gary, is the chairman. George’s is the ninth-largest privately held business in Arkansas with reported revenue of $950 million in 2015.

Carl George graduated from the University of Arkansas with a degree in business administration and uses his UA education and the lessons he learned growing up in the business. His main responsibilities as co-CEO are daily production and operations.

“At the end of the day, we have to make decisions as one,” George said of his brother. “Everybody has to be on the same page. When you have two people, it allows us to talk about ideas and hopefully come up with the best one.

“Watching my dad and my grandfather, they relied on the team to help them make decisions. You put trust back on the team as well.”

Carl George is active in Springdale community affairs, most visibly as the president of the Downtown Springdale Alliance.