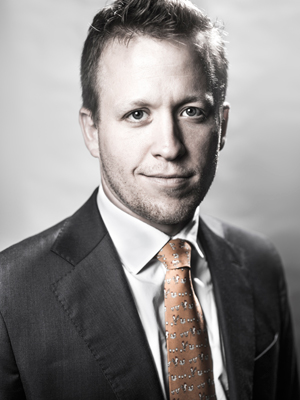 Charles George doesn’t mind sharing leadership of George’s Inc. with his twin brother any more than he minds sharing recognition on the 40 Under 40 list with him.

“We’ve been doing that our whole life,” said Charles George, one minute older than his fraternal twin and co-CEO, Carl. “It’s a lot of fun. We are very fortunate we have the opportunity to work together as a family, not just Carl and I.”

Charles George, like his brother, began working at George’s Inc. at the age of 14. Their father, Gary, had them get a taste of each segment of the business to learn what makes the poultry company so successful after 96 years.

“We would spend time at each division and work throughout the plant,” Charles George said. “I’ve heard it from [Gary George] multiple times, and our grandfather told me and Carl many times we have to be involved in the details of the company.”

George’s chief responsibilities are the company’s sales and marketing, but he and Carl share in the company’s strategic decision-making. “We are totally different people, and we have different strengths and weaknesses,” Charles George said. “Our end goals are the same. We embrace the fact that two perspectives are better than one.

“We have a lot of talented people throughout the organization that we would call superstars. We try not to embrace the superstar culture; we try to embrace the team culture.”