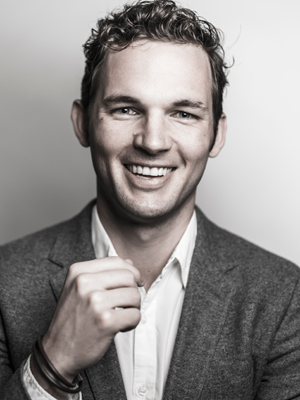 Eric Wilson, chief of the K-12 entrepreneurship program at the startup Noble Impact, says it makes no sense to ask today’s kindergartners what they want to be when they grow up. He says 65 percent of them will eventually fill job types that don’t exist yet.

“We’re preparing kids for an economy of uncertainty,” said Wilson, who joined Noble Impact in 2014 after four years with the Clinton School of Public Service and a stint with Ariston Global Solutions, a company he founded with his brother in Washington, D.C.

Now he focuses entirely on seeking to give “every kid a relevant and purpose-driven education.” He calls a pilot program at eStem Public Charter Schools “a grand experiment that is the first K-through-12 approach to teaching entrepreneurship.”

As an undergraduate at Lyon College in Batesville, Wilson met Skip Rutherford, the Clinton School dean and Batesville native who became a mentor and friend.

“I graduated from Lyon on May 6, 2006, and started working May 8 at the Clinton School,” said Wilson, who helped develop the first master’s in public service program. He mentions his father, John Wilson, who taught him attention to detail in the landscaping business, as another mentor.

“Noble creates a bridge of engagement between the classroom and community. That’s where students begin to write their own stories,” Wilson said.