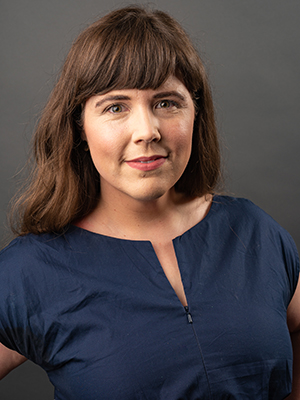 Stephanie Alderdice grew up in the Dallas-Fort Worth area, but she now describes herself as “an unofficial cheerleader for Hot Springs,” where she owns a full-service advertising and marketing agency named for the temperature of the world-famous waters.

“As a kid, my mother would tell me you should go into advertising,” she said, but first she excelled in speech and debate. With an undergraduate degree in rhetoric from West Texas A&M and a master’s in communication from Eastern Michigan University, she was hired as a debate coach at Western Kentucky University. It was there that she met and married a fellow debater, Corey Alderdice, and the couple relocated to Hot Springs when he was named director of the Arkansas School for Mathematics, Sciences & the Arts in 2012.

For the first couple of years in their new home, Stephanie Alderdice managed another business they still own: SpeechGeek Market, an online market where more than a dozen vendors offer speech and debate materials for students and their coaches. Marketing the website and its products led her into the advertising field, and she began to work with a Hot Springs advertising veteran, Kirby Williams, who helped her make local contacts.

In 2016, Alderdice purchased Kirby & Co., and now she employs a full-time creative director and has six contract employees. And she’s exactly where she wants to be, doing the kind of work her mother envisioned. “You really can’t find a better place than Hot Springs, and the city right now is really on a great trajectory.”