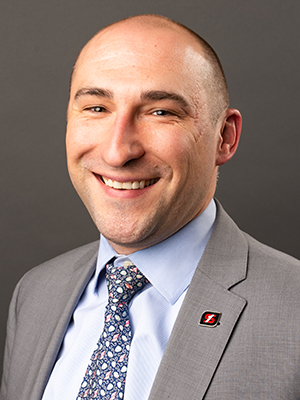 Burt Hicks grew up in small-town Arkansas — if you can call an unincorporated community like Pearcy (Garland County) a small town.

After graduating from Lake Hamilton High School near Hot Springs, he enrolled at the University of Arkansas at Fayetteville to run track and cross-country. His injuries ended his athletic career but didn’t keep Hicks from earning a degree in finance from the UA’s Walton College of Business.

When J. Thomas May, then chairman and CEO of Simmons First National Corp., came to the Walton School to speak, Hicks introduced himself and made the request that set his professional course: He asked May to mentor him.

May encouraged him to get a law degree, which Hicks did at the University of Arkansas at Little Rock’s Bowen School of Law concurrently with studies at the UA’s Clinton School of Public Service. He completed both his Juris Doctor and his master’s degree in 2010 and is a licensed attorney, although he does not practice law.

Instead, he worked in various roles at Simmons, including manager of corporate responsibility and special projects and chief of staff and vice president of mergers and acquisitions, before being named president and CEO of the Simmons First Investment Group in January 2017. SFIG is a retail broker-dealer and investment adviser, and he immediately oversaw a restructuring of the growing operation that resulted in record revenue and profit.