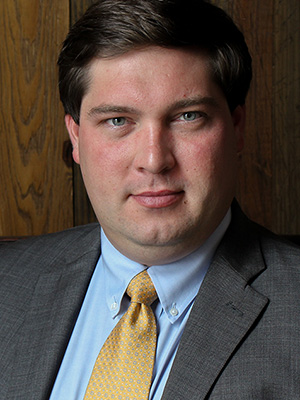 Bailey Moll stays on top of the news, and that’s no recent development.

In fifth grade, his classmates called him “CNN Boy.”

“Half my job is reading, finding out what’s happening, setting Google News alerts for all of my clients, knowing who’s who and who is whose cousin,” said Moll, who puts all that information to work for JPJ Consulting of Little Rock. “My motto is work harder, and try to stay organized.”

An eighth-generation Arkansan, Eagle Scout and Little Rock native, Moll has clients in government entities, businesses and nonprofits, and his duties embrace messaging, media relations and crisis management. A political science major at Fayetteville, he went on to earn an MBA at night at the University of Arkansas at Little Rock.

“A lot of public relations is just listening,” said Moll, who got his start with former U.S. Rep. Mike Ross of Prescott. “You learn facts, figures, lingo, and that helps you tell stories. There are a lot of cool stories to tell.”

Moll was a state committee delegate of the Arkansas Democratic Party. He also serves as chair for the Emerging Leaders of the Centers for Youth & Families, and has done work for the Arkansas Foodbank.