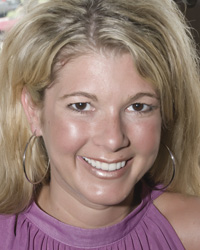 During college, Suzon Awbrey, 34, began tending bar at a joint named J.R.'s Lightbulb Club in Fayetteville. At J.R.'s, Awbrey met Chris King, who owned the club, and the two now own two establishments in the Little Rock River Market District: Sticky Fingerz Rock & Roll Shack and Rumba-Revolution. Managing nightspots can be brutal, requiring waking early and working until after midnight, Awbrey said. "It is like having six full-time jobs," Awbrey said. "There is a lot of sacrifice involved in terms of running these types of businesses. You are going to bed late and getting up super early." Awbrey, however, has found time to become active in many organizations. She is a member of the Junior League of Little Rock, of the board of the River Market Bar & Restaurant Association and of the Virginia Clinton Kelley Festival for the Cure committee. Despite the busy schedule, Awbrey said, owning her own business makes it worthwhile. "I think you have to love what you do and take it seriously without taking yourself seriously, which is hard because our business is 100 percent of us," Awbrey said.