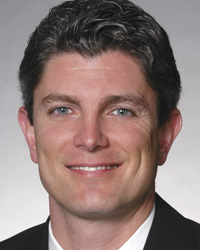 With a degree in manufacturing technology from Arkansas State University and a master's degree in public administration, it would seem that Joe Bailey, 39, has found his place at the Arkansas Economic Development Commission. Before landing at AEDC, however, he spent three years as administrative assistant to the Little Rock city manager and another three-and-a-half years at the Department of Arkansas Heritage, where he oversaw the Main Street Arkansas program. He arrived at AEDC in 2002 with the task of helping companies looking to relocate by explaining what incentives, sites, financing and training are available — an integral part of closing the deal. He leads a team of 10 project management professionals and in the past year has seen Welspun and LM Glasfiber bring $100 million plants into Little Rock and the $80 million Mars Petcare U.S. plant announced for Fort Smith. Bailey serves on the board of Arkansas Economic Developers, which oversees the Arkansas Economic Development Foundation, and he's active at Fellowship Bible Church, where he served as a Share-Fest volunteer and as an usher. Bailey credits his family for instilling a strong work ethic in him. "I certainly learned from it," he said.