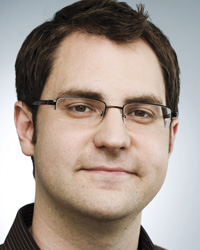 Robert "Rob" Bell, 32, first developed his marketing skills while recruiting audiences to his band's shows. That experience, and a diploma from Rhodes College in Memphis, landed his first gig in the public relations department at Mangan Holcomb Partners of Little Rock. By 2005, Bell, Eric Lancaster and Isaac Alexander had opened their own shop — Eric Rob & Isaac. Bell said the group decided not to use last names to avoid the convention used by many advertising agencies. They also added "Ad Guys" to their logo in an effort to concisely describe what they do. "In our business, there are so many people making up buzz words. Part of the reason we came up with the term the Ad Guys is because that's all we are," Bell said. "We want to produce top-notch creative and provide great service. That's been my business philosophy since I got in the business. If we are doing that every day, then I feel like we are doing well." The agency has done well in its brief history, boasting clients like Riverfest, the North Little Rock Visitors Bureau and First Security Bank of Searcy. Aside from working with clients, Bell stays active on the Riverfest board of directors and with much of the pro bono work the firm does.