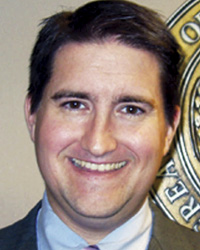 When Cory Cox was 12, his father was laid off from his job at a Little Rock box plant. Cox's father sued for age discrimination, but his attorney got married, moved out of state and was never heard from again. "Just the thought that someone could do that was so offensive," Cox said. "Dad was upset. He didn't know what was going on." Cox decided to become a lawyer to prevent others from going through the same thing. After graduating from the William H. Bowen School of Law at the University of Arkansas at Little Rock, Cox hired on in 2000 as assistant legal counsel for Gov. Mike Huckabee. He was quickly promoted to deputy legal counsel and adviser on criminal justice. In 2005, Cox jumped at the chance to work in the Arkansas Insurance Department's Criminal Investigation Division, where he's now director. "One of the joys of this job is that we do help people that have been harmed," said the Perryville native. Cox, 34, serves on the Arkansas Crime Information Center steering committee and is a criminal justice subject matter expert for the Arkansas Department of Workforce Development. He is a member of the Arkansas Crime Victims Reparations Board and chairs the National Association of Insurance Commissioners' Antifraud Training & Seminar Working Group.