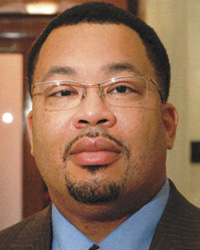 Working for Gov. Mike Beebe is "the most fascinating job I ever had," Lamar Davis said. That covers a lot of territory. After majoring in political science at Dillard University at New Orleans, he graduated in 1994 and came back to North Little Rock. Influenced by Martin Luther King Jr. and his father, Leon Davis, who was active in the NAACP and local politics, Lamar Davis, 37, went on to get his law degree from the University of Arkansas at Little Rock Law School in 1999. He gained experience by working at a law firm, by clerking at the Arkansas Court of Appeals and for a Pulaski County Circuit Court judge and as an assistant attorney general in the state Attorney General's office. In 2005, he became deputy campaign manager for Beebe's election effort, and after the election was deputy director of the transition team. He was a member of the inaugural class of the Center for the Advancement of Leadership Skills, sponsored by the Southern Legislative Conference of the Council of State Governments, and attended the Homeland Security Executive Leaders Program. He is a trustee at Bethel AME Church in North Little Rock. A principle that Davis strives to live by is taken from Donald T. Philips' book "The Founding Fathers on Leadership," namely, that a leader should "listen, then talk; follow, then lead."