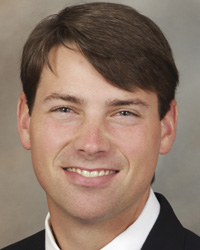 Conner Eldridge, 29, was on the brink of launching a career as an attorney in 2004 when his father-in-law, Ross Whipple, made him an offer that caused a detour to banking. "At its core, [banking is] a people business, and that's what interested me in law," Eldridge said. After a crash course in banking, Eldridge was named president of Arkadelphia's Summit Bank in July 2005 and joined the board of directors in March 2006. He will become the bank's CEO next month. Eldridge, who grew up in Lonoke and Augusta, graduated from North Carolina's Davidson College with an English degree in 1999 followed by a law degree from the University of Arkansas at Fayetteville. His résumé includes work as a legislative assistant to U.S. Rep. Marion Berry, 1999-2000; as a legislative correspondent for U.S. Sen. Blanche Lincoln, summer 1999; and as a judicial law clerk to U.S. District Judge G. Thomas Eisele, August 2003-September 2004. Eldridge serves on the Clark County Board of the United Way, the Arkadelphia Chamber of Commerce and Clark County Industrial Commission. He has served as co-chair of a charity benefiting Clark County foster children and was a volunteer coach for youth in Arkadelphia and Little Rock.