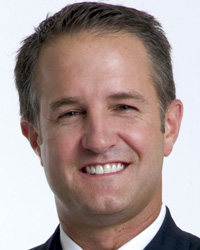 Carlton-Bates is no longer one of Arkansas' largest private companies — Bill Carlton sold it to Wesco International Inc. in September 2005 — but it's still being managed by one of Carlton's lieutenants. Todd Farnsworth, a product of Northeast High School in North Little Rock and Baylor University in Waco, Texas, joined Carlton-Bates in 1994 after earning his MBA at the University of Arkansas at Little Rock. He began working directly for Carlton in 1999 and was on the board of directors when the decision was made to seek out a private investment so that the electronics distributor could continue to grow. Farnsworth, 39, now oversees about 600 employees, including an assembly center in Saltillo, Mexico, and offices in more than two dozen major markets from Boston to San Jose, Calif. And that means a lot of travel. "I have a sales background. That's what keeps me going. If I had to sit in this office all day, I'd die," Farnsworth said. And now he has his own team of managers to run the place when he's gone. "What's the best thing that's happened to you and to Carlton-Bates? It's that we've been able to build a real strong team of young talent that will be able to build and carry on the business."