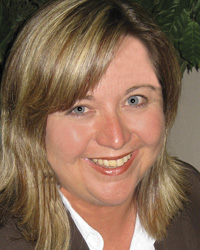 It has been three years since Kalene Griffith, 40, took over at the Bentonville Convention & Visitors Bureau. She had an interesting career path before finding her way to northwest Arkansas. Griffith, who turned 40 after the nomination deadline for Forty Under Forty, worked for a stint at Walt Disney World in Orlando, Fla., and then worked as a special events manager in the same town. However, she remembers most fondly her time as the director of a YMCA in Fulton, Mo. "At the YMCA, I was able to influence many of the kids to lead a better life," Griffith said. "There are a couple of kids that I still keep in touch with and that I am proud to say I am a part of their future." Griffith remains active in the organization, serving on the board of the YMCA of Northwest Arkansas. She also serves on the Arkansas Association of Convention & Visitors Bureaus board. She gleans the ideas that make the Bentonville CVB successful from her contact with the people in her community, Griffith said. "I am fortunate to work with great people in our business and have been surrounded with some very forward-thinking individuals who have made our organization more successful in the past three years," Griffith said.