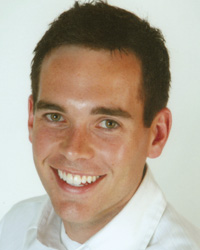 Jay Howard, 27, said he has always had an entrepreneurial spirit. After about a 30-minute discussion around a dining table, the 27-year-old helped come up with the idea for I.O. Metro, which sells mid-priced imported furniture. The Helena native declined to release revenue numbers but said sales have risen 600 percent since the company, headquartered in Rogers, opened in 2005. It now has 56 employees and nine stores in several states. Four stores are scheduled to open late this year and between six and eight stores in 2009. "While others are struggling in the furniture business ... it's kind of the perfect environment for us," Howard said. "While everyone else is downsizing, it's time for us to go." Before starting I.O. Metro, Howard worked for Lebanon Seaboard Corp. of Lebanon, Pa., which sells lawn and garden products. As its national account manager, Howard doubled the account in just over a year. Howard and I.O. Metro are the sponsors of the new program Young Leaders Society for the United Way of Northwest Arkansas. Howard also donates money to villages in India to improve the schools. Howard tells his employees: "If we're swimming upstream, we're probably headed in the right direction. And the answer 'no' is not an option. There's always an alternative."