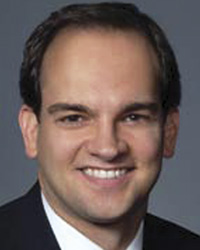 David Johnson, 39, has served two terms in the Arkansas House of Representatives, but when the 87th General Assembly convenes in 2009, he'll be in the Senate Chamber. The Democrat from Little Rock drew no opposition from either party when he filed for the District 32 Senate seat being vacated by Jim Argue. "I won't be able to fill his shoes exactly the way they are, but I'll come in with my own strengths," said Johnson, who said his expertise lies more with the courts system and the judiciary than with education, which has been Argue's forte. Johnson grew up in Conway and received his bachelor's degree from Georgetown University in Washington, D.C. He worked for Sen. Dale Bumpers, D-Ark., from 1991 to 1994 and, as an Arkansan living in D.C., he campaigned for Bill Clinton. He returned to Arkansas to study law at the University of Arkansas at Fayetteville, and then worked in the Pulaski County Prosecuting Attorney's office from 1998 to 2004, when he first ran for the legislature. He practiced law alone and then with the James & House firm for a couple of years before joining Wright Lindsey & Jennings as an associate last November.