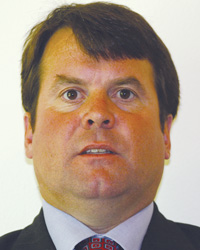 Following in the footsteps of his grandfather, M.O. Rasberry, and his father, Henry Jordan, Henry Jr. has grown from insurer to real estate agent to developer. Henry Jordan Jr. got his insurance license in 1993 and entered the business at First Delta Insurance at Helena. In 1996, he branched out to open First Delta Realty, which now has 15 agents in Helena and Marion and owns various real estate holdings in Phillips and Crittenden counties. In 2005, through his First Delta Development Group, he bought the 73-unit Riverview Apartments in Little Rock and converted them into The Cliffs condominiums. Last December he began construction of a 72-unit condo project called Chenal Woods next to the Chenal Country Club Founders Course. He also owns Jordan Rental Properties in Fayetteville, which has 324 apartments in five complexes, along with some commercial real estate investments in northwest Arkansas. He served with the Phillips County Chamber of Commerce before moving to Little Rock, where he's active at Trinity Episcopal Cathedral. Jordan said he learned persistence from his grandfather. "You overcome obstacles by staying with a good plan and eventually a break will come and work for you."