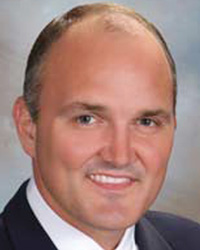 Robbie Wills, 40, was elected in 2004 to represent District 46 in the Arkansas House of Representatives. Less than five years later, when the 87th General Assembly convenes in January, he will be its speaker. "That's term limits," said Wills, who turned 40 after the deadline for nominations for the "Forty Under Forty" designation. The Conway native is a graduate of the University of Central Arkansas and Bowen School of Law at the University of Arkansas at Little Rock. His law practice is focused primarily on probate and estate planning, but as House Speaker he plans to focus on health care and economic development. Specifically, he wants to make a statewide trauma network a reality and provide as much support as possible for health care providers, particularly in rural Arkansas. He is also looking to revisit Amendment 82, which provides incentives for "super projects" that involve investments of at least $500 million. "Amendment 82 is really geared toward the large manufacturing jobs, and we really have some opportunity with knowledge-based industries that will never meet the investment thresholds but really provide good, high-paying jobs."