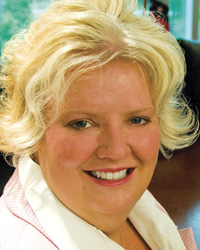 Connie Whitlock, 39, had been working in the accounting department at Transamerica, but she switched to a leadership position in customer service. "I felt personally my career was headed to working more with customers. I felt it was more of my passion," Whitlock said. Whitlock started working for Transamerica as an intern in 1986 — yes, 22 years ago. During that time, she graduated from Bellarmine University in Louisville, Ky., and kept working her way up. Currently, she is the head of all administration, in control of all technological functions and supports marketing and sales activities. Four years ago, Whitlock left the Louisville, Ky., division of Transamerica, where she previously worked as vice president of operations. "Through my leadership, I feel it is my job to make a difference in the company and its employees. Also, it is important to provide quality products to the customers," Whitlock said. Both Transamerica and Whitlock work with United Way, but she also personally supports the Juvenile Diabetes Research Foundation and Susan G. Komen Foundation