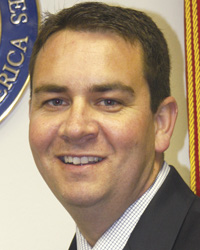 Anyone in the 4th Congressional District who needs help from the government can call on Dumas native Jeff Weaver, 34. After graduating with a political science degree from the University of Arkansas at Monticello, he worked for the school for two years. Then, while working on a public administration degree at the University of Arkansas at Little Rock, he got involved with the Institute for Government. His first taste of real politics came from campaigning for Al Gore for president. He then joined the campaign to elect Sen. Mark Pryor. After interning for Sen. Blanche Lincoln, he became field representative for Rep. Marion Berry. For the past three years, he has been with Rep. Mike Ross, and he loves south Arkansas. "I try to live by the Golden Rule," Weaver said. "I try to help people move through the federal government and work to get the constituent and agency together." He has a heart for the Delta region and oversees Ross' four offices in the district. He also directs the congressman's economic development priorities. He's a member of the Garland County Democratic Central Committee and serves on the UAM Alumni Foundation Board.