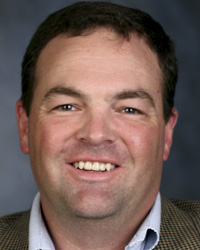 Sam Walls III, 39, was mulling over his career options with his father one Sunday afternoon and learned that the organization his father heads, Arkansas Capital Corp. Group, had an opening "I had the background that seemed to fit, and we figured out we could work together without killing each other," Walls said of the 2003 move. These days, he is president of the Arkansas Economic Acceleration Foundation among a varied menu of duties with ACC-related work. A 2007 graduate of the Leadership Greater Little Rock program, Walls said one of the most rewarding aspects of his work is seeing business ideas come to fruition. His previous work history includes two years as director of planned giving for Baptist Health Foundation and five years as legal counsel and educator for Arkansas clients of The Hartford Insurance Co. Walls, a 1996 graduate of the Bowen School of Law at the University of Arkansas at Little Rock, graduated from Southern Methodist University in Dallas with a political science degree in 1992. His civic and volunteer work includes the Little Rock Zoo board of governors, the Mentor to an Inner City Student public schools program, the Arkansas Venture Forum and other projects related to entrepreneurial development.