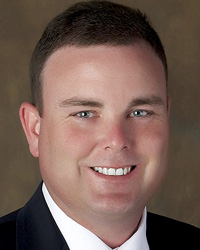 Terry Toney, 38, was a student at Jacksonville High School when he started stocking shelves at Whit Davis Lumber Co. Twenty years later, in August 2005, he was named president of the company. Toney attended Arkansas State University-Beebe for a short time, but he never stopped working for John A. Davis, owner of Whit Davis Lumber. "I wanted to stay in the lumber business, I knew [Davis] was wanting to expand the company and I felt there was an opportunity for me," Toney said. Whit Davis had been a one-store business since 1953, and when a second store was opened in Cabot in 1994, Terry Toney was its manager. "I was very young and very green, but I accepted it. And it worked out great," he said. After succeeding John Davis as president, Toney opened a third store, on Highway 65 at Greenbrier, in May 2006. The company now has annual revenue in excess of $25 million, Toney said, and he is acquiring stock in the company, along with Davis' three children. Toney recently finished a term as chairman of the Jacksonville Boys & Girls Club and has been on the board of directors of Jacksonville Youth Baseball for several years.