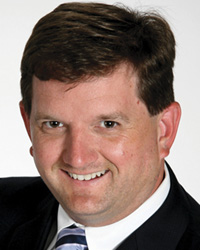 The Baldor Electric Co. that Ed Ralston works for in 2008 is much larger than the company he joined in 1995. And he was intimately involved in the acquisition that doubled the publicly traded company's revenue. After graduating from the University of Arkansas at Fayetteville, Ralston took his accounting degree to Coopers & Lybrand in Tulsa. But the Charleston native wanted to get closer to home, so he worked as controller for a regional company in Fort Smith and then joined Baldor's audit services team. He was promoted to director of audit services, then to director of finance and treasurer. In 2007, he was given the job of integrating into Baldor the power systems business it purchased from Rockwell Automation Inc. of Milwaukee for $1.8 billion in cash and stock. It was his job to make "two $1 billion companies [into] one $2 billion dollar company." Along the way, he was also given responsibility for running Baldor's generator group. Stock analysts have written that the integration appeared seamless, and Ralston agrees that it went well. "For the most part, it's about being fair to people and being a straight-shooter. We didn't want to promise anything we couldn't deliver." Ralston, 38, is on the UA Walton School of Business Alumni Advisory Council and on the boards of the United Way of Fort Smith Area and Golden Rule Clothes Closet.