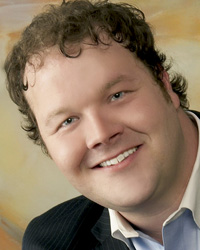 Bradley Phillips, 28, could be the youngest full-time lobbyist in Arkansas. He gained that distinction when he left the governor's office as a policy analyst in March 2007 to join his father's Phillips Management & Consulting Inc. "It's an absolute blast," he said of the move. "I love the business, and Dad is my hero, so I get to be around him every day." Phillips also serves as executive director of the Arkansas Physical Therapy Association and is CEO of Arkansas Med Jobs, a headhunting firm for medical professionals founded in 2007. His résumé includes summer work with the State Treasurer's Office in 1997 and the Attorney General's Office in 2004. Phillips also worked on and off as a reporter and photographer during a seven-year period at various central Arkansas newspaper, television and radio outlets. Phillips attended Conway's University of Central Arkansas, studying political science and public relations, and spent six months in the foreign studies program at Teikyo University in Maastricht, Netherlands. He serves as vice president of the Arkansas Junior Chamber of Commerce, Conway Chapter of the Junior Chamber and Conway Jaycees and is active with other Conway and Faulkner County civic projects.