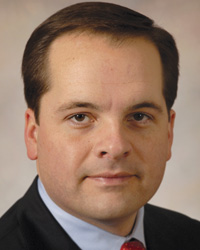 The McLarty Cos. and RLJ-McLarty-Landers Automotive Group

After a family vacation to the Bahamas when he was about 12, Franklin McLarty fell in love with the hospitality business. McLarty segued into his nearly decade-long stint in hospitality after college, beginning at the Broadmoor Hotel in Colorado Springs, Colo. He worked his way through a variety of supervisory and managerial positions until he moved on to the Biltmore Hotel in Miami. McLarty later transitioned to the Biltmore's parent company, the Seaway Group, and then to the McKibbon Hotel Group. But in 2005, when McLarty saw the point of no return in his career in hospitality approaching, he decided it was time to move back and get into the family automotive business, which is now known as the RLJ-McLarty-Landers Automotive Group. McLarty, 33, serves on the boards of City Year Little Rock/North Little Rock and the Little Rock Film Festival and was appointed by Gov. Mike Beebe as vice chairman of the Arkansas Economic Development Commission in 2007. He also works on fund-raisers for the American Heart Association and the Arkansas Arts Center. But such community involvement is fitting given his personal philosophy. "You can always do good and do well at the same time," McLarty said.