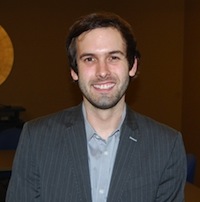 After spending a few years in Los Angeles acting and shooting films, Jack Lofton decided to move back to Little Rock for personal reasons. It seems to have been a good choice.
"It was perfect timing," he said. "I came back at the exact same time that the Little Rock Film Festival was being created."
While enrolled at the University of Arkansas at Little Rock's Bowen School of Law, from which he graduated, Lofton began volunteering for the film festival. In the festival's third year, he became executive director.
Through his leadership and expansion initiatives, the festival has grown from a three-day citywide event with 65 films and 5,000 in attendance to a five-day regional festival with more than 100 films and more than 25,000 in attendance.
Lofton had a vision that the LRFF could be the Southern film festival, and it seems to be coming true. "We are a culturally vibrant scene; we are sophisticated," he said. "We are an international film festival with the Southern experience."
When not busy with the festival, Lofton also works on his own projects. A short film titled "God Hates Gaga," for which Lofton embedded himself in the infamous Westboro Baptist Church in Topeka, Kan., as its members prepared to protest a Lady Gaga concert, is currently in post-production.