by Lance Turner
Article sent successfully!
We were unable to send the article.

Last night on THV 11 News, Arkansas Business editor Gwen Moritz told our news partner (above) that "confidential human source 1" in the criminal complaint against Arkansas Treasurer Martha Shoffner could really only be one person, broker Steele Stephens of St. Bernard Financial Services Inc. of Russellville. This, based on our reporting from January, a look at the books at the treasurer's office and, well, common sense.

Today, Max Brantley at the Arkansas Times drives it home, citing "two highly placed sources" that told him they are certain the source is Stephens. The Arkansas Democrat-Gazette also looked today at the inordinate amount of business St. Bernard conducted with the treasurer's office (see our chart below), and notes that Arkansas Securities Department Commission Heath Absure is lauching his own investigation into St. Bernard's dealing with the state.

Stephens, who is still employed at St. Bernard, isn't taking phone calls. Neither, apparently, is his father, Steve, who is recently retired from same company and was also cited in our January report about the FBI investigation. Our attempts to contact him haven't been successful.

Brantley also has a conversation with St. Bernard's CEO, Robert Keenan, who at first didn't believe Steele Stephens was the source, based on a conversation Keenan says he had with the broker. But given the events of Monday, Keenan's mind has changed. 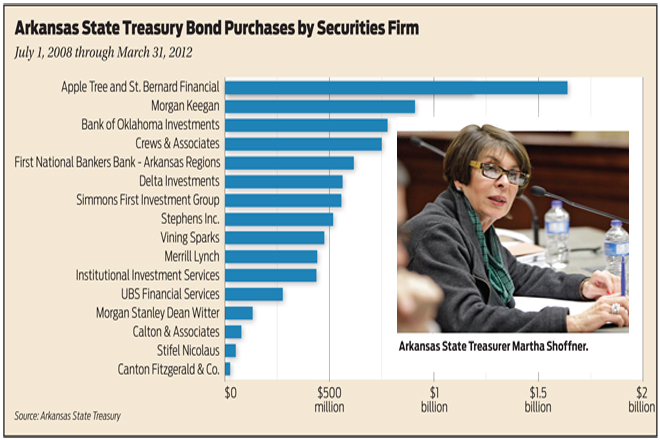