In El Dorado, Dollars Will Get You Spudnuts

A Spudnut is an unusual doughnut, Mike Dumas says, but then he corrects himself.

“Actually, it isn’t a doughnut,” the president and CEO of the El Dorado Union County Chamber of Commerce says. “It’s shaped like a doughnut, but it doesn’t taste like one because it melts in your mouth when it’s hot.”

The technical difference is that Spudnuts are made primarily with potato flour, rather than wheat. The recipe originated in Germany, but Dumas can’t remember a time without them in south Arkansas. For Dumas and many others in El Dorado, it’s a sweet, living memory. “I’ve lived in El Dorado all my life, and it seems like we’ve had a Spudnuts Shoppe in El Dorado my whole life.”

The Spudnuts franchise, which came to El Dorado in 1948, landed in a new set of sticky hands a decade ago when Nicolas and Francisca Gonzalez bought the shop. Francisca had worked for the shop’s previous owners, William and Nancy Varnell, and wanted to strike out on her own.

Nicolas Gonzalez said that 10 or 12 years ago, Francisca told him “she would like to run a place like this.” She wanted Nicolas to ask William Varnell to sell him the recipe and teach him to make Spudnuts. Varnell had a different idea. “He said, what if I sell you the recipe, the building, the contents, everything?”

Unlike their product, the Gonzalezes’ business plan had no holes in it. Through 70 years of changing tastes, the fried delicacies have been a hit in El Dorado. 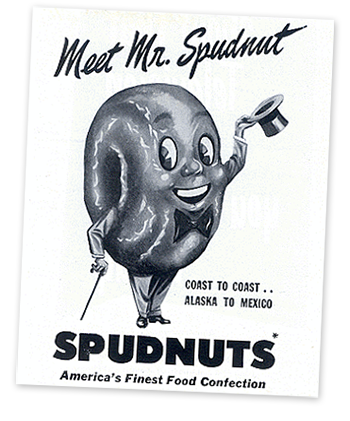 Spudnuts shops, once a sprawling nationwide network, were popularized as a brand by Al and Bob Pelton in Salt Lake City. They were a hot new thing in Oregon when Daisy Stringfellow of El Dorado was captivated on a trip after World War II. She wound up getting a franchise and opening the original El Dorado shop on West Oak Street. She sold it to the Varnells, her daughter and son-in-law, and the shop eventually moved to its current site on West Faulkner Street.

The shop is going strong these days thanks to the Gonzalezes’ work ethic, Dumas said, and the vision of their lenders at Southern Bancorp of Arkadelphia, which acquired Timberland Bank of El Dorado in 2009. Only about 50 shops remain from the worldwide Spudnuts empire that once claimed more than 300 sites, but the El Dorado location is routinely crowded. (South Arkansas even has another Spudnuts, on Main Street in Magnolia.)

“How’s business? I can’t complain,” Gonzalez said, even though the shop’s 5 a.m. opening means he could often use a jolt of the coffee his eatery is constantly brewing.

“He starts I think at 3 in the morning to have the door open at 5,” son Joel Gonzalez said. “If there’s a batch already out and somebody knocks at the door, he’ll go ahead and open up for them.” Francisca, working the register, is constantly at hand, serving up hundreds of dozens of Spudnuts.

Get The Lists
The Largest Minority Companies and Largest Woman-owned Companies lists, in either PDF or spreadsheet formats.

“They’re wonderful, hard-working people,” said Nathan Pittman, Southern Bancorp’s senior vice president for policy and communications. “They really illustrate the kind of work we do as a community bank, helping businesses thrive at the community level.”

Nicolas Gonzalez moved from Mexico to Lake Village in Chicot County in the 1980s, and his family soon followed. He’s thankful to Southern Bancorp, which he said has been crucial to his success.

“Southern Bancorp was Timberland, which I didn’t know much about,” Nicolas Gonzalez said, discussing his early moves to buy the shop. “William Varnell connected me with Timberland to see if I could qualify for the loan.” The relationship deepened as Timberland became Southern.

“The bank has some really nice and helpful people,” he said. “I don’t really know how big or small Southern Bancorp is, but I know it has helped me a lot. And every time I need some help, they are ready to help me.”

Dumas, the chamber leader, spoke about Spudnuts in a video produced for Southern Bancorp by Chris Cranford of the Cranford Co. in Little Rock. “A businessman wants to start a business, and this is where the financial institutions come in to get them over, and so many of our businesses here are just like that, especially downtown,” Dumas said. “Like any business that’s unique, [Spudnuts] draws attention and it draws people in. People come to this community, and they want to get a Spudnut, among other things. These kinds of businesses are really the backbone of the community.”

Sonya Cagle, a Spudnuts aficionado since girlhood who was in the El Dorado shop last week, likened the taste and texture to Krispy Kreme, “except they’re still not the same. Spudnuts are better, especially if you eat them hot. They’re not made to last.”