The Little Rock retailer had its worst quarter in history as the pandemic struck in early 2020, but since then its revenue and share price have skyrocketed. In its fiscal third quarter that ended in October, its profit was $197.3 million, a 518% increase from the $31.9 million in profit reported the same quarter last year.

That’s the numbers part. The mystery is why the market is so bullish now on Dillard’s, which before the pandemic was an emblem of a mall-based brick-and-mortar retail paradigm on its way out.

“They were very, very good results,” Saunders said, “and I think it just made a lot of investors sit up and say, well, actually, maybe Dillard’s is going to have a pretty good run of growth.”

“I think that really is a major contributing factor to the growth in stock,” Saunders said.

Experts said the surge in profit in relation to sales came in a seller’s market in which Dillard’s commands full price for merchandise without the discounts that were common before the pandemic. The company also closed some stores and made itself leaner.

CEO William Dillard II said in a Nov. 11 news release that the company had “continued strong sales combined with record gross margin and expense control” in the third quarter.

Still, other retail watchers aren’t sure about the stock price climb.

“There’s no rhyme or reason for the stock being worth that much,” said Mark Cohen, director of retail studies at Columbia University’s Graduate School of Business. “There’s probably some speculators in the stock thinking that the family may bail out or otherwise recapitalize.”

The department store chain was founded by the late William Dillard in 1938 in Nashville (Howard County). His son, William Dillard II, 76, is the CEO and has been involved in almost every aspect of the company’s operations for more than 50 years.

Other department stores have seen financial improvements this year, but no other retailer’s stock price has soared as spectacularly as Dillard’s.

Some reports have cheered department stores’ recent success. Brick-and-mortar retail sales “were solid again in” the third quarter “despite rising Covid cases and challenged supply chains,” according to a Nov. 30 report on the mall sector from Green Street of Hoboken, New Jersey, a research and advisory firm that focuses on commercial real estate.

Macy’s, a Dillard’s competitor, reported strong sales for the quarter that ended Oct. 30, $5.44 billion compared with $4 billion in the previous quarter last year. Its net income was $239 million in the third quarter, compared with a loss of $91 million in the same quarter the previous year. “Consumers continue to spend, and we successfully offered a wide range of expanding merchandise assortment to meet their growing demand,” Jeff Gennette, chairman and chief executive officer of Macy’s Inc. of New York, said in a news release on its third-quarter results. 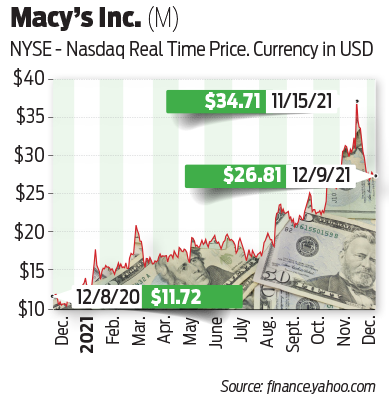 “Any recent manifestation of success you have to take with a grain of salt,” he said.

While Macy’s and Dillard’s had a positive performance, “it doesn’t mean anything to the future,” he predicted.

IBIS World’s industry report on U.S. department stores in July said that the department store industry has continued its long-term decline during the last five years up to 2021 with revenue expected to fall at an annualized rate of 8% to $111.3 billion. The reasons for the decline include the rising competition from online retailers, the report said.

Dillard’s should have a happy holiday season, which should keep the stock price high, Saunders said.

The supply chain upheaval will actually help Dillard’s profits during the fourth quarter, he said. There will be less overbuying and later markdowns, resulting in Dillard’s selling products at higher margins.

“The number of sales and promotions and discounts it is offering are down compared to before the pandemic, and that’s really pushing up margins and profits,” Saunders said. “I think that will continue into the holiday quarter.”

But if seasonal items arrive in January, they will have to be discounted to be cleared.

Another benefit to Dillard’s and other retailers is that consumers still have money from stimulus funds or savings and are ready to spend. People still aren’t traveling as much as they did before the pandemic, so some of the money that might have gone for vacations now can be spent at department stores.

“People are out, and they’re spending,” Saunders said. “Dillard’s seems to be capturing some of that spend.”

In October, the National Retail Federation of Washington predicted that holiday sales will break records, rising between 8.5% and 10.5% over 2020 to between $843.4 billion and $859 billion.

The Decline of Malls

Some malls have been struggling as tenants have closed or filed for bankruptcy protection, including mall anchors such as J.C. Penney, Sears and Kmart.

Saunders said the fear that malls will close remains. “Some of them are not very good quality,” he said. “There’s not really a good reason to go there.”

Nevertheless, some malls are doing “really well.” And Dillard’s is in a lot of strong locations.

“That bodes well, much better than, say, Macy’s, where there’s a much bigger spread of stores and some of them are in not that great malls,” he said. “Most of Dillard’s, not all of them, but most of them are in pretty good locations.”

E-commerce continues to keep growing, though, and chips away at department stores’ sales.

The National Retail Federation expects that online and other non-store sales, which are included in the total, will increase between 11% and 15% to between $218.3 billion and $226.2 billion this holiday season. In 2020, the total was $196.7 billion.

Cohen said that brick-and-mortar stores aren’t going away because consumers will always like to browse and touch items before they buy them. But e-commerce has taken “a tremendous amount of share in virtually every category you can imagine,” he said. “At the end of the day, the department store is the dinosaur that has to reinvent itself for the future, and some have been struggling with that and making inroads and others have been basically nowhere.”

The challenge for Dillard’s and other department stores will be to keep the financial success going.

The fourth quarter and the first quarter of next year should be pretty good for department stores, Saunders said.

After that, department stores will face some tough same-store sales comparisons. Same-store sales, which measure performance at locations that have been open at least a year, are considered an indicator of a retailer’s health.

Saunders said that if the economy slows down and consumers stop spending, that could be financial trouble for retailers. “If the heat comes out of the consumer economy, we could start to see some poor results from the department store sector again,” he said.

The rise of the price of Dillard’s Inc. stock since November 2020 has resulted in an increase of wealth — at least on paper — for members of the Dillard family.

When the stock price closed at $410.15 on Nov. 23, the shares that had been worth less than a half-billion last November were worth $3.09 billion, at least for a time. The stock price has slid since then. On Dec. 8, the price was $266.48, meaning the value of the Dillard’s family shares was $2 billion.

The family received good news on Nov. 19, when Dillard’s announced that its board of directors had declared a special dividend of $15 per share for its Class A and Class B common stock. (Regular quarterly dividends are typically around a dime per share.)

The big payout is to thank shareholders, but it also benefits the Dillard family. Their total dividend payout will be about $112.8 million.