Like all kinds of constructors, Arkansas economic developers have learned that steel offers a sturdy base to build on.

Since Nucor Corp. and Yamato Steel started making beams at the state’s first major steel mill in Blytheville back in 1988, Mississippi County in far northeast Arkansas has evolved into the No.1 steel producer among the 3,143 counties nationwide, at least in certain months, according to County Judge John Alan Nelson.

As manufacturing rose, so did dozens of peripheral companies, including suppliers, customers and non-steel operations benefiting from proximity to some of the country’s most productive mills. Two of the state’s largest economic development projects ever are steelworks built or under construction in the county, and 11 of the 19 companies on Arkansas Business’ list of largest in-state steel producers are in Mississippi County.

“We took the giant leap forward this year with U.S. Steel breaking ground on a $3 billion mini-mill that’s excited a lot of interest,” Nelson said.

Since U.S. Steel’s January announcement that it would build the mill next to Big River Steel in Osceola, the county has averaged “about a phone call a week from supporting industries wanting to come in, so we’re working each one of those through with our economic developers and Clif Chitwood at the Great River Economic Development Foundation.”

The county, once the biggest cotton producer nationwide, is still home to some of the state’s most productive cropland, “but along with agriculture, we now have the largest-growing steel industry hub,” Nelson said. “We have businesses that turn Mississippi County-produced steel into John Deere parts, steel tubes and hundreds of other things.

“The numbers I get show that Mississippi County is the largest steel-producing county in the country for several months of the year, and I expect it to be first all year long after the new plant is completed.”

‘Situations You Dream About’

“As an economic developer, these are situations you dream about, being No. 1 in an industry like that, and you’re going to be able to go out and capitalize on it,” said Mike Preston, Arkansas’ secretary of commerce and executive director of the Arkansas Economic Development Commission.

Preston, who spoke with Arkansas Business last week, has been the point man in Gov. Asa Hutchinson’s two-term crusade to recruit businesses and manufacturing. He’s also an evangelist for Arkansas’ “business-friendly environment” and Hutchinson’s personal commitment to it. 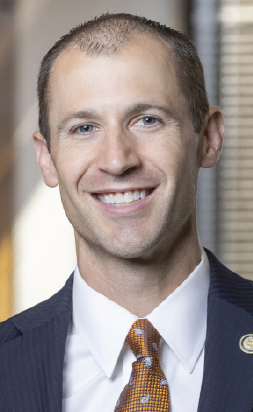 Preston pointed to the U.S. Steel project, the biggest economic development ever in Arkansas. The opportunity struck like lightning, he said, and Hutchinson was ready. “The governor reached out with the first call about it in September of last year, and by Feb. 22, there was a shovel in the ground,” Preston said. “So we moved quickly, and we had help.”

The Legislature transferred $50 million to the governor’s Quick Action Closing Fund for site infrastructure preparation, Mississippi County kicked in with help from its half-percent sales tax for economic development, and “Entergy stepped up as the utility provider to meet the intensive power needs,” Preston said. (See sidebar.) “Our Department of Environmental Quality and other regulators were also extremely quick to issue permits for starting construction.”

David Burritt, CEO of U.S. Steel, remarked that his company got a mill permitted and built in Arkansas “quicker than it would have taken to get just a permit to begin construction in Pennsylvania.”

Plans for the new plant came shortly after U.S. Steel, the Pittsburgh industrial icon, bought upstart Big River Steel’s 647-employee operation for a combined $1.5 billion over two deals in 2019 and 2020.

“Having Arkansas as a steel hub with big names like Nucor and U.S. Steel helps us open doors to other companies, and it gives those companies a reason to say, ‘Hey, do we want to be closer to those steel mills?’ To me, this really sets us up for the automotive industry,” Preston said, noting commitments from electric vehicle companies Canoo Inc. and Envirotech Vehicles Inc. to make autos in Arkansas.

Lexicon From the Start

Arkansas battled Alabama and Mississippi to land the U.S. Steel plant, which will create 900 direct and indirect jobs, including hundreds of steelmaking positions paying $120,000 a year, officials said. The facility, one of the most technologically advanced in the world, will require a construction workforce of about 2,000, and will be able to make 3 million tons of steel a year. Together with its sister mill, Big River Steel, it is expected to produce 6.3 million tons of product per year once it starts producing, perhaps as early as 2024.

Nucor of Charlotte, North Carolina, is America’s largest steel producer, and Nucor-Yamato and Nucor-Hickman, its second Mississippi County plant, commissioned in 1992, were key to the company’s ascendance. Since Nucor arrived, Mississippi County has become a global leader in rolled steel production and fabrication, with products going into automobiles, skyscrapers and stadiums, appliances, pipelines and power plants.

From the very beginning, Lexicon Steel of Little Rock and its Prospect Steel division in Blytheville have supplied steel for Nucor’s building projects, and Lexicon Holding Co. was third behind Nucor and Big River on the Arkansas Business list. “My sister [Jennifer Schueck McCarty] actually delivered the bid to erect the structural steel for Nucor-Yamato in 1986,” Patrick Schueck told Arkansas Business. His father, the late Lexicon founder Tom Schueck, was tied up. “Dad sent my sister up with the bid to Nucor. They were awarded the project and became the steel erector.”

Lexicon now has 1,834 employees worldwide, including about 600 in Arkansas.

Other Employers of Steel

Other top steel employers in Mississippi County include Nucor, No. 1 at 2,000, Big River at 647, and tube maker Tenaris Hickman at 400, Atlas Tube in Blytheville at 200 employees, and JMS Russel Metals Corp. of Blytheville, a coil steel processor, at 135 workers.

Preston, the commerce secretary, said the German multinational SMS group built a 52,000-SF workshop in Osceola “simply to supply the equipment going into the steel mills and then to offer maintenance and upkeep on it.” A separate but similar-sounding company, Systems Group of El Dorado, “got a contract with U.S. Steel to do the coating that goes on electric arc furnaces,” Preston said. “Now they are adding 60 jobs in El Dorado as a direct result of that new mill.” 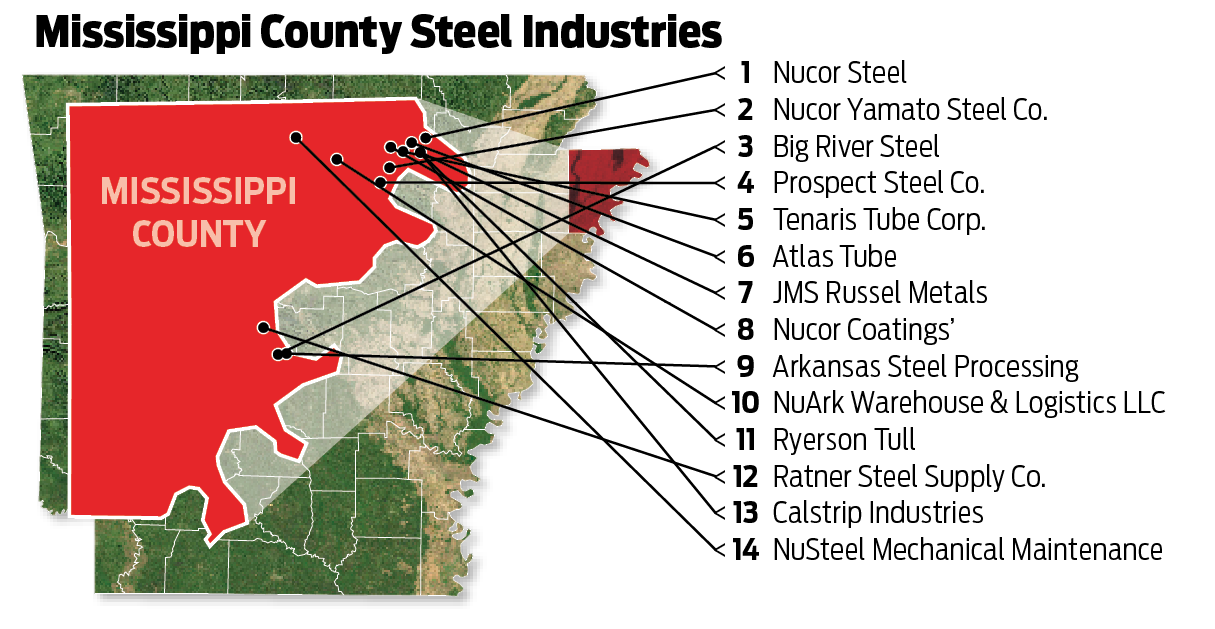 Lee Morgan, president and owner of Systems Group, said it’s an “exciting time” to be in the steel industry in Arkansas. “America is going through a resurgence of bringing manufacturing jobs back to the USA, and our business is benefiting from that. The steel industry is investing in new mills and expansions, and as a result, Systems’ orders are dramatically increasing. … This expansion will help us triple the equipment we currently build in Arkansas.”

Preston and Nelson, the county judge, give a lot of credit to Arkansas’ skilled workforce, and they’re happy that skill is being repaid. Steel mill jobs offer $100,000 to $120,000 a year on average, three times the state’s average wage in manufacturing, “It is a great example of why we need to invest more in our skilled workforce,” Preston said.

Resources like the barge-friendly Mississippi River and interstate and rail connections all helped Mississippi County recruit the steel mills, which now entice startups like Envirotech. It has announced plans for its first U.S. manufacturing center in Osceola, buying the idle 580,000-SF Fruit of the Loom factory. It hopes to make electric cars there, employing 800 people at an average of $60,000 a year.

Steel companies employ about 3,600 workers in Mississippi County, which has about 40,000 residents. In Blytheville, Atlas Tube, a division of Zekelman Industries of Chicago, has two facilities including a new 515,000-SF facility billed as the largest continuous electric resistance welding mill in the world.

“Mississippi County and Arkansas’ mechanically minded workforce was a great discovery by Nucor,” said Schueck, the Lexicon CEO. “Ironworking has gotten into the people’s DNA.”

Preston summed it up: “It took a lot of moving parts coming together, but the steel industry shows that when we put our heads together, Arkansas can compete with anybody.”