The tear-down on Washington Avenue will clear the way for a new five-story hotel and set the stage for developing the empty block just west of Simmons Bank Arena.

A memorandum of understanding with investors including Nabholz Properties of Conway calls for building mixed-use developments along Broadway and Washington next door to the arena, which set off downtown’s revitalization with its construction and eventual opening in 1999.

Dickey-Stephens Park, four blocks to the west, opened eight years later, and by that time Main Street had begun its transformation from what former Mayor Joe Smith called “kind of a scary place” into a dining and entertainment hub and a lure for companies like First Orion Corp. and Taggart Architects, which moved there. A $5.3 million public gathering space, Argenta Plaza, a park with water features, swings, a stage and dramatic lighting, opened in fall 2020 at Main and Sixth streets.

Also on the city’s current drawing board west of the arena: a parking deck surrounded by shops, offices and apartments paired with a 40,000-SF conference center on land between Main and Poplar streets now occupied by North Little Rock Electric and the City Services Building. Those are set for eventual demolition.

Greg Nabholz, CEO of Nabholz Properties, is working with investors Scott Hilburn and Scott Landers to develop lots to the north and south of the 2nd Street Promenade, the brick pedestrian path that leads west from the arena’s west entrance to Poplar Street and on to Main. The parking deck and conference center would be on either side of the promenade between Poplar and Main.

“There will be two buildings on each side of the promenade with an additional building fronting Broadway Street and one fronting Washington with parking in between,” Nabholz said. Nabholz Properties’ Broadway Street LLC owns the parcel on Broadway just west of the arena, having bought part of it as a partial investor some 15 years ago. Consolidating that property, along with a parcel bought from the city, cost about $1.1 million, he said.

Argenta Entertainment Development Management LLC, with Nabholz Properties, Hilburn and Landers as prime investors, has the city property south of the promenade under contract. Hilburn is an attorney at the Hilburn Law Firm at 1 Riverfront Place in Argenta, the landmark bank building across Main from the City Services Building.

Both Broadway Street LLC and AEDM “are working with the city, Pulaski County and Rock Region Metro to extend the Junction Bridge trail from where it emerges at Washington Avenue across both properties to Broadway Street along the west property line of the arena,” Nabholz said.

By the end of the year, he said, a final plan will be ready for City Council consideration, after tenants are lined up and investors have approved all details.“From there, we’d get our permits,” Nabholz said. “We’d like to start construction by July 2023.”

Investors must approve a contractor and architect, but Nabholz said ideas for the north side of the promenade “include restaurant and entertainment with potential hospitality and residential uses above in a building envisioned as six to eight floors. The building on Broadway is likely to be one or two floors of retail and service businesses, and the Washington Avenue structure is foreseen as two floors with dining and retail on the ground floor and residential or office units above.

“Once we have finalized the development plan and received approval from our investors, we will present the plan to the North Little Rock City Council by the end of the year,” Nabholz said. “Once the council approves the plan and we receive the necessary permits, we will close on the property in early 2023 with construction to start by July.” 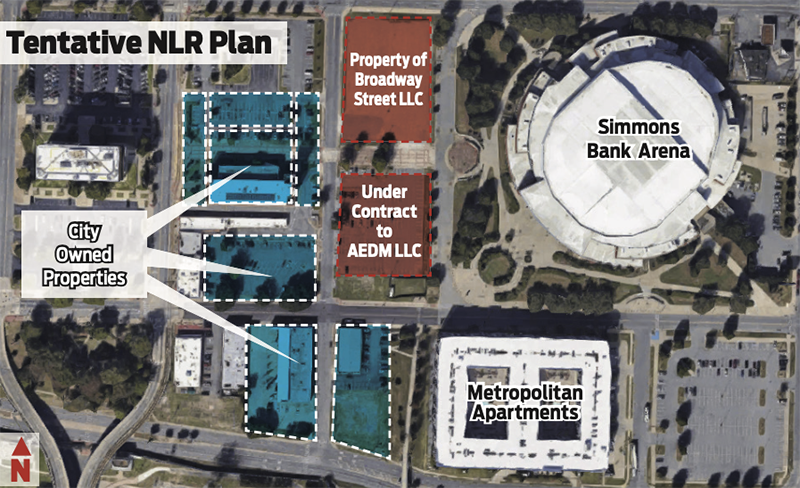 Meanwhile, across Main from the site of the planned conference center, T.J. Lefler is showing off some $3 million in improvements to the former Twin City Bank and U.S. Bank building he has rechristened as 1 Riverfront Place. Lefler’s 1 Riverfront QOZB LLC bought the gleaming black 113,650-SF landmark, the tallest building on the north riverfront, for $5.6 million a little over a year ago. Intense work followed inside and out, Lefler said.

“We’ve put over $3 million into the renovations, and we’re almost finished,” Lefler said before offering a photographer a tour. “It’s a sort of iconic location in the middle of everything in Argenta, and it’s a building of stature that we think is just going to be there forever.” The former Sage Partners executive said the building has all new glass, remodeled common areas, newly landscaped entrances and a redone parking lot.

“I’d say it is 95% occupied,” he said. “U.S. Bank, which sold it to us, has renovated its space and signed a new lease.” Landers, also an investor in the developments along the arena promenade, owns Applied Technology Group, which has taken up a chunk of the revamped bank building. “He’s a partner in our building and has spent between $1 million and $2 million on their two floors,” Lefler said.

End of Line at Bus Station

Crews began work Tuesday demolishing the old bus terminal at 118 E. Washington Ave., part of a downcast stretch of Washington Street that includes pawnshops and the Arkansas College of Barbering & Hair Design, a campus in the Arkansas Technical School system. Greyhound moved its terminal last year to Love’s Travel Stop on Interstate 40 in Galloway. The bus company said the move reflected a national trend of stations leaving downtown areas for the outskirts of cities.

The North Little Rock City Council voted in May to pay $650,000 for the bus terminal property, with Mayor Terry Hartwick saying that the ability to control development options downtown was well worth the price.

The new hotel site is a half-block west of the Junction Bridge, cater-cornered from the building Nabholz, Hilburn and Landers are developing. “The plan is to connect the bridge path to the arena and Broadway, to the Inland Maritime Museum and trails along the river, with Main Street Argenta and even to Dickey-Stephens Park to the west,” Nabholz said.

Cost projections for the projects haven’t been finalized, but the two-parcel, four-building project is called 2nd Street Promenade, on land bounded by the arena to the west, Poplar Street to the East, Broadway to the north and Washington Avenue to the south.

“We are working with H+N Architects out of Conway on the concept plans for the project, and final decisions on the development team will be made by the AEDM LLC investors soon,” Nabholz said.

Even west of the ballpark and the Broadway Bridge, residential development is continuing, following the lines of The Vue on Riverfront, Metropolitan Apart-ments immediately south of the arena, and Thrive Apartments on Fourth Street. Major apartment buildings like those, as well as townhouse complexes like Argenta Flats along Maple Street, are key elements in the city’s long-term mission of creating a downtown and riverfront where people can live, work, shop and play.

One goal for the mixed-use developments being planned now is landing a grocery store — if not a supermarket then at least a small mercantile like Stratton’s Market in downtown Little Rock.

Moses Tucker Partners of Little Rock announced Wednesday that it’s developing a $70 million upscale apartment complex to the west of The Vue, the $36 million, 250-unit complex that Moses Tucker developed with Terraforma and opened last year.

The complex, on the east edge of the Rockwater community, which introduced apartments and single-family homes to the riverside just west of Argenta, will include 360 units and be known as The Resort at Rockwater. The project is a joint venture of Moses Tucker, Terraforma LLC of Maumelle, and Jim Jackson and Lisa Ferrell, the developers of Rockwater.

Robert Birch, North Little Rock’s director of development, said years of planning have envisioned another hotel and conference center downtown. “Other than the Wyndham we don’t have another hotel in the area, and we’re constantly having to send people across the river to have meeting space. These are major footholds for us as a city, and obviously they kind of go hand in hand.”

He said Benton’s new 29,000-SF conference center is constantly booked, “and we miss out on those opportunities a lot.”

The idea was always to have more offices and shops, too, in the area. “It all kind of blends and fits together,” Birch said. “The one part that we don’t have an opportunity to do anything with right now is the Bank of America branch location across the street from City Hall.” The bank has not shown interest in selling the location to the city, but that could change. “I think in time it could come.”