Funding for a new $4 million road is the latest evidence that a $3.5 billion plan to build a colossal liquid fuel plant in Jefferson County remains on a long path to reality.

After years of preparations, all authorities say the biggest economic development project in Arkansas history is on track to transform natural gas into highly refined diesel and jet fuel.

The notion has faced doubts since it was proposed nearly a decade ago. But nearly seven years ago, leaders including former U.S. Transportation Secretary Rodney Slater and retired Gen. Wesley Clark identified 1,100 acres along the Arkansas River north of the Pine Bluff Arsenal as the site for the plant, where gas would be chemically processed into liquid fuel so pure you could drink it. “You wouldn’t want to,” said Roger Williams, CEO of Energy Security Partners of Little Rock. “It has no nutritional value.”

Retail diesel prices are sky-high now, and the project’s financial viability relies on the arbitrage opportunity in the gap between natural gas prices and higher crude oil prices. The problem is, gas prices have also risen in a global energy crunch.

The economic development corporation, which bought the land and leased it to ESP for a nominal sum in 2016, heard an update from Jefferson County Economic Development Alliance CEO Allison Thompson this month. 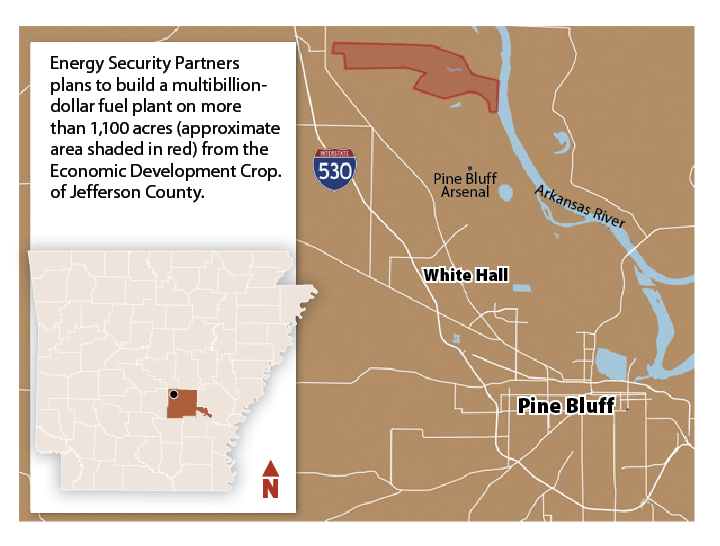 Codron, the GTLA president, was in Florida last week cleaning up after Hurricane Ian when reached by Arkansas Business. He said that the project is “making steady technical and commercial progress,” and that it will soon have an engineering, procurement, construction and commissioning contractor engaged “to deliver this game-changing project for our state’s economy and energy security.”

Thompson told Whispers the project has proceeded “to the point that it needs a dedicated road” to cross railroad tracks and other impediments, and offer site access during construction.

The AEDC is offering the $4 million road grant, and the economic development corporation is guaranteeing it. The land will be valuable for development, and particularly attractive as an industrial park site, should the GTL project falter, Thompson said. “One of the hardest things to do for an industrial development is pulling the land together for a large enough site. This property has been pulled together, and would be ideal for other industrial projects as well.”

“To my mind, though, this project is going forward.”

Arkansas Commerce Secretary Mike Preston seconded that, citing the pandemic as one reason for the slow progress. “Despite many global factors causing delays, including the COVID-19 pandemic, the GTLA project in Jefferson County continues to move forward. AEDC has committed $4 million to assist with the building of the access road to the site. AEDC’s commitment is subject to performance guarantees by the company which are backstopped by the Jefferson County Alliance.”

In September 2021, GTL Americas hired an environmental services firm, Geotechnology LLC, to do soil and seismic testing at the site. The timeline included completing all engineering, financing and commercial agreements within 24 months. About 11 months remain in that timeline.

When the long-promised project is complete, GTL Americas said in a news release at the time, “the plant will convert abundant domestic natural gas into 1.7 million gallons of ultra-clean transportation fuels per day.”

The development is expected to bring 3,000 construction jobs to Jefferson County, where per capita income is $19,000 a year. The plant itself will support about 200 jobs, with expansion plans in the wings.

The GTL plant will use a century-old technology known as Fischer-Tropsch conversion to turn piped-in natural gas into ultra-clean diesel, jet fuel and naphtha. GTL Americas Pine Bluff, as the plant will be known, hopes to capitalize on a robust natural gas pipeline infrastructure and river barge transportation. It plans to distribute the clean fuels by truck, rail and marine barge, according to company literature.