In the end, what was most surprising was that the levees held up as well as they did.

The flooding caused more than $100 million in damage in Arkansas and another $450 million in damage to the McClellan-Kerr Arkansas River Navigation System alone, Gov. Asa Hutchinson told Arkansas Business last week. Houses and businesses were destroyed, farmland inundated, sections of roads and highways washed away. And damage estimates are still being compiled.

Now comes the re-evaluation of Arkansas’ long-neglected levee system, which will surely seek to address at least two big public policy questions: Who should be responsible for the levees? Who should pay for their maintenance?

Examining the state’s levees will be the job of the 25-member Arkansas Levee Task Force, whose members were announced by the governor earlier this month. In addition, Hutchinson will ask the Legislature to appropriate $10 million from a reserve fund to pay for repairs to levees damaged by the flooding.

Scientists say that a warming world means ever-heavier rainfall events and, in turn, increasing flooding, an example of which was on display just last week, when remnants of a tropical storm system drenched south Arkansas. Dierks (Howard County) received 16.17 inches of rain in 24 hours.

If Arkansas’ future includes more rain and more flooding, then ensuring that the state’s flood-control infrastructure can protect its citizens and their property becomes even more important.

Asked whether the Levee Task Force would take into consideration scientific consensus on the changing climate, Hutchinson, speaking in an interview in his office, said: “I certainly want the Task Force to follow science.”

He added: “If scientists say that we’re going to have increased flooding in the future or increased levels of rain that we haven’t had before, then we need to take that into account in our future planning.”

The National Weather Service warned on May 22 that the floods were coming. Heavy rains had filled rivers, flood risk-reduction reservoirs and lakes throughout the central portion of the United States, essentially the Arkansas River drainage basin. “It just kept raining,” said Jay Townsend, a spokesman for the Little Rock District of the U.S. Army Corps of Engineers.

To ease pressure on the lakes’ dams, the Corps began releasing water, which flowed into the Arkansas River.

“It surpasses all Arkansas River flooding in our recorded history,” Hutchinson said May 29 at a press conference. “That should be enough to get everybody’s attention.”

In Yell County, which experienced the only full failure of a levee, “the Corps kept raising our elevation expectations,” Yell County Judge Mark Thone said. “It seemed like every day it was raised another 6 inches or a foot, and we realized then that we were in a serious situation.”

On May 22, Thone had declared the situation an impending disaster, which enabled the county and the city of Dardanelle to tap into the resources of the Arkansas Department of Emergency Management and the National Guard. They obtained a sandbag machine, and members of the community began filling and deploying sandbags.

But the water kept coming. About 12:30 a.m. Friday, May 31, Thone said, the water “started eating out a groove” in the Dardanelle Levee, and he knew the levee couldn’t survive. The area had already been evacuated but Thone told his road crew checking on the levee to get out. Thousands of acres, mainly farmland, and about 10 homes were flooded.

Now, in mid-July, the Arkansas River remains high, but “things are kind of back to normal except the levee is not there now,” Thone said. “Of course, the highway’s gone too,” he said, referring to a portion of state Highway 155.

The river threatened and overtopped other levees; however, with the exception of the Dardanelle Levee, they didn’t completely fail. One of those levees overtopped by the Arkansas River is in Perry County, where in late May Rapert shot dramatic video, posted on Facebook, as the waters inched higher and higher. 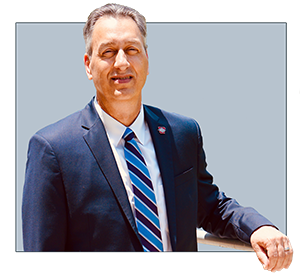 A.J. Gary, the director of the Arkansas Department of Emergency Management, says in this week's Executive Q&A that businesses need to have plans and to make sure employees know them.

Rapert, R-Conway, has had some hard experience with that levee, part of the Perry County Levee District No. 1 system, which was overtopped by floodwaters in 2015 and 2016 as well, flooding his property along with that of others near Bigelow. That experience has made him something of a legislative expert on the myriad problems facing the levee system in Arkansas, and he was named to the Levee Task Force.

The Perry County levee also was breached in 1990, Rapert noted, and wasn’t fully repaired, leading to its overtopping in 2015 and 2016. “It had never had the proper repair and maintenance, and that was what was causing some of the problems that the community has experienced over the last several years,” he said.

“It was only after the ’16 flood, and the legislation that we passed — which allowed for those boards to be reconstituted and have those new members be appointed — did they have the ability to get back together to even fix the levee.”

And this is the heart of the problem with the levee system in Arkansas: The levees are old — the average age is 67 — and neglected, and in many cases, if not most, the boards that once oversaw them are defunct. In addition, a system patched together over decades means that even determining the number of levees in Arkansas is difficult.

A 2009 legislative audit report noted that the state’s levee system arose in the aftermath of the catastrophic Mississippi Valley Flood of 1927, which killed an estimated 1,000 people, left thousands homeless and inundated more than 2 million acres of Arkansas farmland.

But the levee districts that formed were created by “various acts of the General Assembly, county ordinances, and circuit court orders,” the report said, and the passage of time has created “uncertainty as to which laws govern which levee districts. As a result, Arkansas is served by a patchwork of district and privately owned levees with no central oversight of the flood control structures.”

Rapert’s legislation in 2016 sought to address some of these issues. He shepherded through a bill that gave county judges the power to appoint members to inactive levee boards and required county clerks to send annual levee district reports to the Arkansas Natural Resources Commission.

However, despite the requirement, of about 90 known levees that should have active boards, only about 20 have submitted reports.

A $489,250 grant from the Natural Resources Commission went to repair the Perry County levee, but this year’s floodwaters were too much for it. It was overtopped, again flooding property and leading to the 12-day closure of a portion of state Highway 60, “which was an extreme disruption for the community and also a safety hazard,” Rapert said.

Inseparable from the issue of who’s responsible for the state’s levees is the question of who should pay to maintain them or repair them when they’re damaged.

“That’s something we’re hoping can be addressed with the new Levee Task Force,” said Thone, the Yell County judge.

The Dardanelle Levee was built in the late 1940s, Thone said, and the board occasionally had meetings, “but they didn’t have any money, so I guess you could say they were inactive.”

Asked whether the board had ever assessed levee fees on area landowners, Thone thinks that “maybe generations ago there were — I’m not sure — but they never collected them or quit collecting them or something. You know, all those people are dead and gone.”

“But, you know, everybody’s going to have to have some skin in the game, as they say.” He thinks levee maintenance will require both federal and state funding.

Thone is hopeful that the Task Force can create a uniform set of standards that levee districts will be required to meet. Like Rapert, Thone is a member of the Levee Task Force.

The 2009 legislative audit report focused on the latter two kinds of levees. The boards of local levee districts comprise “property holders within the protected area of the structure. The districts’ sole responsibility is to the property owners within their district. State and local government officials have no oversight or control over the maintenance and operating status of the districts’ flood control structures.”

And when local district levees or private levees that are not meeting Corps of Engineers standards are damaged, they’re not eligible for federal funding for repairs. That leaves local communities and the state on the hook.

Townsend, of the Corps of Engineers, said there are 15 inactive levee boards along the Arkansas River alone. No maintenance is being done on those levees and they’re not being held to a “minimally acceptable standard by the Army Corps of Engineers, and they’re not in a federal program where we can assist them if there was some sort of failure after a flood,” he said.

Rapert said that looking at the situation “from a 50,000-foot level, what happens in a crisis event — ultimately, no matter what level of protection has been done locally — they turn to the state and the federal government for help. That has always happened.”

That means, he said, that the Levee Task Force needs to examine whether the state has “a vested interest in making sure that those levees that are protecting critical infrastructure are absolutely maintained and doing their job. Because it ends up costing the state and all taxpayers more to handle a crisis situation, where there’s tremendous loss of property and maybe even life, than there is to actually make sure that there’s funding to help maintain some of those areas.”

Rapert said, “We’ve lived for decades with this patchwork levee system, and then we periodically have a real crisis — and in this case, a flood unlike what we’ve seen probably since 1927. That means that everyone in positions of authority at the state and local levels now need to work together to ensure that we are much better prepared in the future.