CEO Puts All Doubt to Rest: Travelers to Stay Put in NLR

Drive a stake in the speculation: The Travelers aren’t going anywhere.

He said central Arkansas’ longtime minor league team and North Little Rock were finding a path to divvy up the costs of a multimillion-dollar renovation of city-owned Dickey-Stephens Park, work dictated by Major League Baseball and Mother Nature.

Six weeks ago, Meeks was asking the city to provide $7 million to shore up a sinkhole-prone field and to spend an extra $5.6 million on stadium and clubhouse upgrades like new field lights, training rooms and facilities for female umpires and athletes. He argued that bigger upgrades and facility additions should be the city’s obligation as owner.

Now he sees wiggle room, and the North Little Rock City Council has put down real money, approving $700,000 last week for a new playing surface and committing $800,000 to hire a construction engineering firm to plan wells to abate sinkholes that have appeared ever since the Travelers moved into the park along the Arkansas River in 2007. That engineering work was contracted to Black & Veatch of Overland Park, Kansas.

Mayor Terry Hartwick had previously committed $9,000 to keep the Travelers at the picturesque red-brick, green-seated park at the foot of the Broadway Bridge, an emblem of downtown resurgence and western gateway to the revitalized Argenta Arts District. The mayor earmarked the $9,000 as a deposit for the field’s new turf, which will be installed by 4Most Sports Group of Grove City, Pennsylvania. The mayor has signaled he is amenable to the city shouldering about $6 million of the park’s burden.

“We’re going to get something worked out,” Meeks said. “I’ve been to probably 30 minor league ballparks, and I’m biased, but ours is probably the nicest, or at least among the top few. But under a 2021 agreement that streamlined minor leagues and put Major League Baseball in charge, we have to make these changes by the 2023 season. So we’ve got to get something done.” 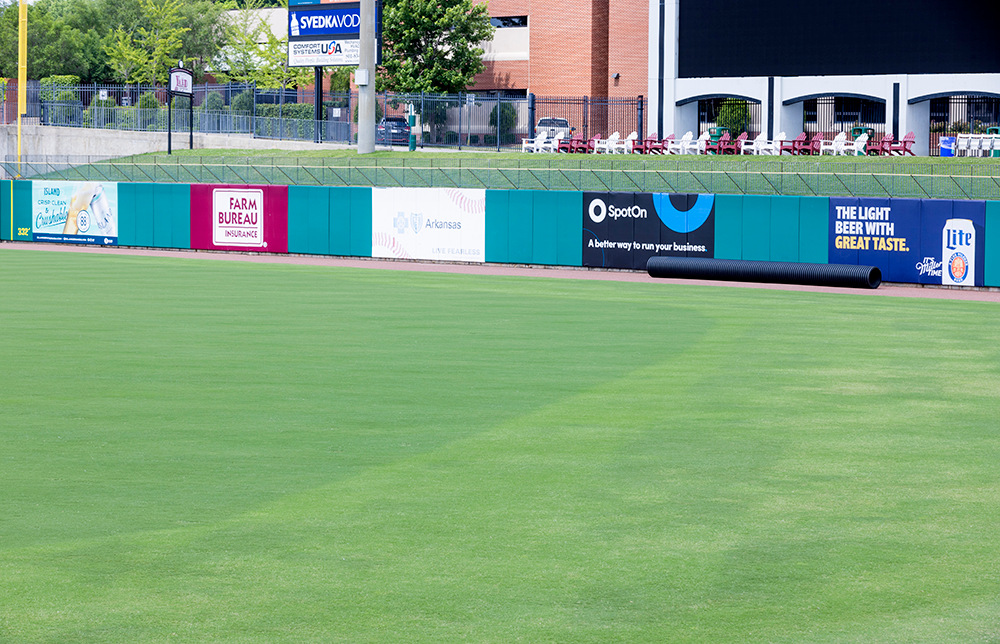 New sod in the outfield after sinkholes were repaired (Karen E. Segrave)

The renovations’ urgency comes from Major League Baseball, which is requiring compliance to revised minor league facilities rules by spring 2023; the Travelers’ actual lease on Dickey-Stephens runs through 2026, with the Travs paying the city $230,000 a year until the last two years, 2025 and 2026, when the rent drops to $115,000 a year. Throughout negotiations, the city has held that the lease requires the ballclub to pay for upgrades beyond the field itself. North Little Rock largely paid for the stadium’s construction through a dedicated sales tax. (See sidebar.)

The Travelers themselves devoted about $1.4 million on required renovations last year, including “new Wi-Fi, high-definition video equipment and a video board, all required by MLB,” Meeks said.

It never seemed likely that the Travs would depart North Little Rock for a town like Benton, Cabot or Conway. Those towns lack any parks up to Dickey-Stephens’ standard. But Meeks had been open to offers from cities with parks that could have been brought up to par. But he never explored any specific moves.

“The fans really love the Travelers being here,” Meeks said. “I mean, how many places can a dad and mom bring two kids, buy tickets to an event, have a great time and feed everybody for about $60? Inflation has brought that up from about $50 or $55 for the family, but it’s a really great deal. It’s an attraction that central Arkansas doesn’t want to lose.”

Meeks has tried to keep ticket prices and concessions steady, but meats for all those dogs and burgers haven’t cooperated. “We had to raise some concession prices,” he said. “We haven’t had as many problems with short-staffing as restaurants and some other employers because most of our concessions workers are high school students.”

A Good Season So Far

All considered, Meeks said, the club is ahead of 2019 financially, its last normal season before the COVID pandemic. “It’s a testament to our front office team and to our fan base coming out.”

Attendance and concession revenue have been up at the park over the opening eight weeks compared with previous seasons; the 4,600-fixed-seat park has an official capacity above 10,000 and typically draws 300,000 fans a year. Revenue from concessions is also up. “That has helped our situation,” he said. A couple of big crowds, 6,000 and even 7,000 one fair evening, had Meeks and his office staffers handing out hotdogs.

As a boy, Meeks shagged foul balls at Travelers games in old Ray Winder Field near the Little Rock Zoo. In 2012 he joined the Travelers at Dickey-Stephens and steadily rose to become CEO in December 2020.

The renovation requirements raised talk, some from Meeks, that the team would consider leaving their riverside home, a site that has been a blessing for ambience but a curse for drainage.

The riverside geography makes for great views of the gleaming white Broadway Bridge and Little Rock skyline, but the field itself is below river level, and floods and soggy conditions have taken their toll. The massive Arkansas River flood of 2019 exacerbated the instability.

That is one reason Hartwick is open to spending millions to keep the field sound. A stadium with a huge sinkhole in left field is little use to the Travelers, a AA affiliate of the Seattle Mariners, or any other team.

Former North Little Rock Police Chief Mike Davis, now Hartwick’s affable chief of staff and top negotiator on the ballpark issue, said the city feels that its commitment to the playing surface and the $6 million in sinkhole abatement “is about the limit of what the city can go,” but he acknowledged that the Travelers face a tough deadline with Major League Baseball, which has streamlined the minor leagues down to 120 teams, 30 each in AAA, AA and High-A, and A divisions. The Travelers compete in the AA Texas League, and they usually rank among the top half-dozen or so in AA ball in attendance, Meeks said.

At the June 13 city meeting, council member Nathan Hamilton said he’d be willing to pay more for renovation costs, but only if the Travelers would agree to open their books. “Even if we are not contractually obligated to do that, I’m willing to help, but I need to know if they need that help or not.” Meeks said that as a private company, the Travelers are not interested in making their books public.Another council member, Charley Hight, stated on the record that he supports any city efforts to keep the Travelers.

“The contract that we currently have with the Travelers runs through 2026, I think,” said Davis, Mayor Hartwick’s staff chief. “We would like to extend that up to 2030, at least. That’s going to be something that will take a while to accomplish, because there’s going to be attorneys from several places involved. But we want to make sure to do that.”

A House of Four Brothers, With Help From a Penny Tax

Since you’re reading Arkansas Business, you’ve presumably heard of Witt Stephens and his brother, Jack, who built the largest brokerage firm off Wall Street in Little Rock and left their name on Stephens Inc. and all sorts of other projects in Arkansas.

You may also have some memory of Bill Dickey, the Searcy High School standout who became an All-Star catcher for the New York Yankees before joining teammates like Babe Ruth and Lou Gehrig in the Hall of Fame in Cooperstown, New York.
Lesser known was Dickey’s younger brother George, known as Skeeter, who played for the Red Sox and White Sox.

All four are honored with plaques outside the doors of Dickey-Stephens Park in North Little Rock, which devoted city money to build the ballpark as a new home for the Arkansas Travelers, who moved into the new and picturesque riverside ballpark in 2007.

The minor league squad had played at Ray Winder Field near the Little Rock Zoo from the field’s opening in 1932 to the end of the 1958 season, when the Travelers decamped to Shreveport and left Little Rock without a minor league club for the first time since 1914.

A new Travelers team, a defunct New Orleans club purchased through a stock drive, returned to Little Rock in 1960 and remained there until crossing the river 47 years later.

Construction of Dickey-Stephens Park began in 2005 after North Little Rock voters approved a temporary 1% sales tax levy specifically earmarked to raise $28 million for the $32.6 million stadium. The park was envisioned as a magnet for a rejuvenated downtown and a bookend to nearby Simmons Bank Arena, then called Alltel Arena, the first big new project after the creation of the Argenta Arts District in the 1990s. 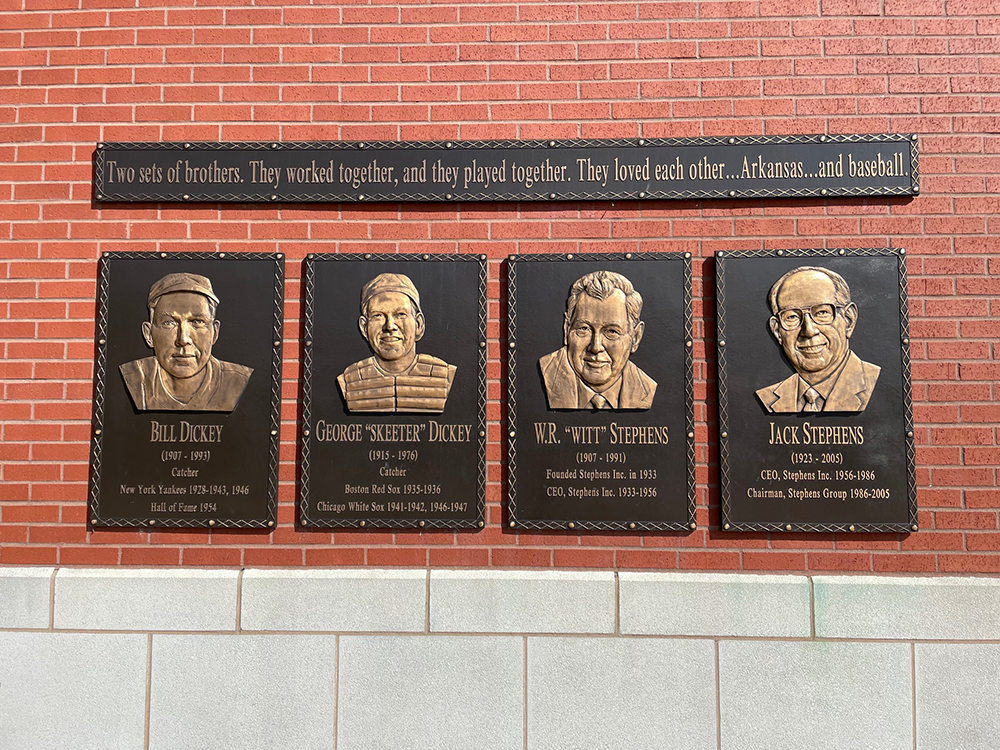 Dickey-Stephens, built on land donated by Jack Stephens’ son Warren Stephens, who also donated $441,000 for the project, has seating for about 7,000 fans, and room for far more in lawn chairs.

The ballpark plaques, which honor “two sets of brothers” who loved each other, loved Arkansas and loved baseball, include these inscriptions:

After their baseball careers, both of the Dickey brothers went to work for Stephens Inc.