Walmart Inc. of Bentonville, the world’s mightiest retailer, has always advertised its low prices, but lately it’s been erasing a reputation for mediocre pay.

With 2.3 million employees worldwide and 1.6 million in the United States, Walmart has raised pay over the past two years for everyone from sales associates to store managers, pharmacy workers to truck drivers.

The No. 1 company on the Forbes 500 list, with 2022 fiscal revenue of $573 billion, Walmart has increased benefits, developed a fast-track training program for store manager jobs averaging $210,000 a year and committed to paying for workers’ college tuition and books.

“We’ve been continuously investing in higher wages for our store, club and supply chain associates, raising our average U.S. hourly pay to $17.06,” said Jimmy Carter, a spokesman for Walmart and Sam’s Club. “We’ve raised pay for more than 1 million hourly store associates within the past two years to ensure we are offering good jobs in every market and role, with a path of opportunity for everyone to build a career.”

The better pay has little to do with rising minimum wages nationwide; it’s a result of increased competition for labor, particularly after Walmart announced a 150,000-worker hiring push in 2021. Retail has never been a high-wage economic sector, and with other industries adding workers, innovative pay and benefits are crucial now, the company said.

Competitors like Target, Costco and Amazon have raised pay as well, some beyond Walmart’s levels. (See Whispers.)

“Low-wage in-person workers are in high demand across all industries,” said Kenneth Dau-Schmidt, the Carr Professor of Labor and Employment Law at Indiana University in Bloomington. “Firms need these workers to gear up their operations and their numbers were decreased during the pandemic due to early retirements and unreliable child care. These workers are in demand in restaurants, service businesses and all retail stores.  As a result, businesses are competing by raising pay and benefits.”

Walmart hopes a mix of better pay, benefits and career-building will make it a destination. In April, it raised pay for its 12,000 truck drivers and began what it calls the Walmart Private Fleet. The idea is to train current workers to become drivers making up to $110,000 in their first year. “Walmart is covering the costs for frontline supply chain associates to earn commercial driver’s licenses [a cost of $4,000 to $5,000] and become a professional Walmart driver,” Carter said. 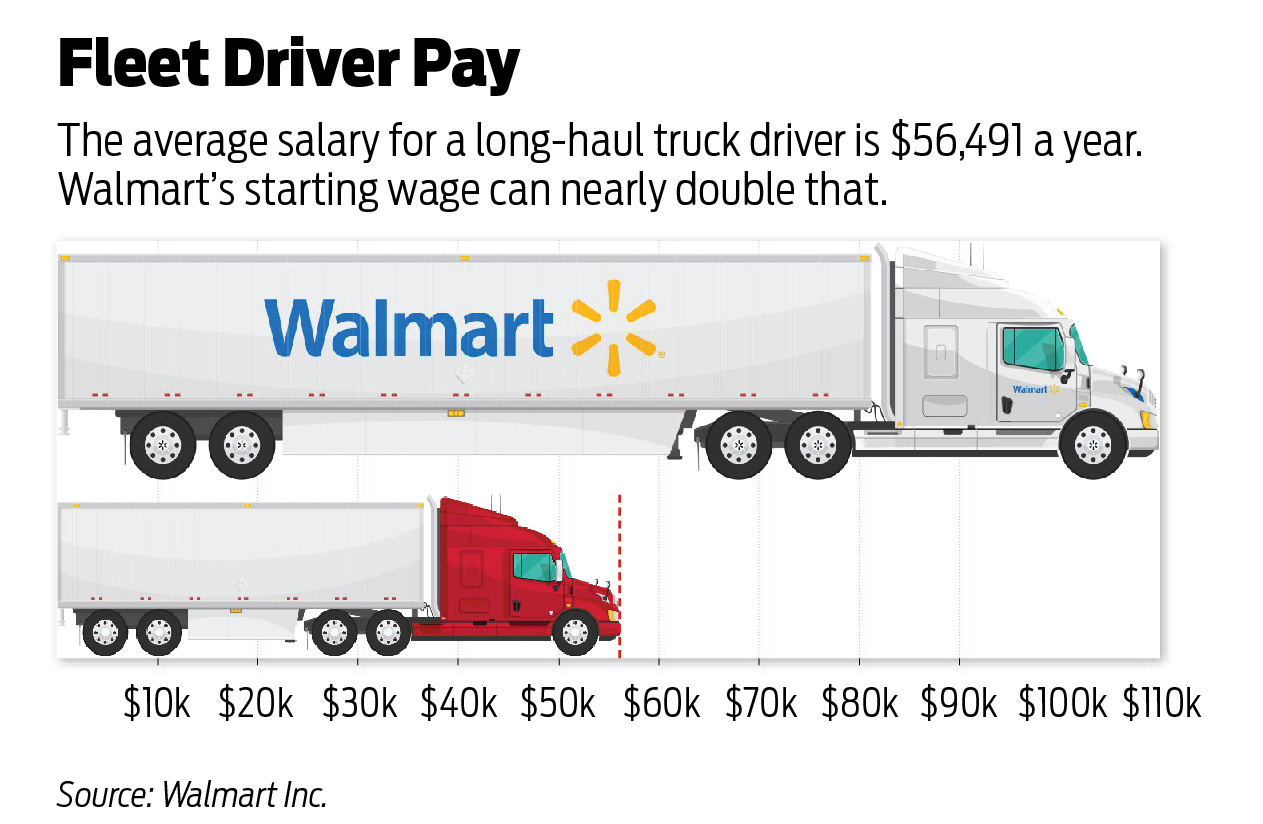 Associates entering the 12-week trucker training program already have access to the company’s Live Better U program, which covers college tuition and books, and to Walmart Academies, which teach advanced retailing skills to thousands of associates. 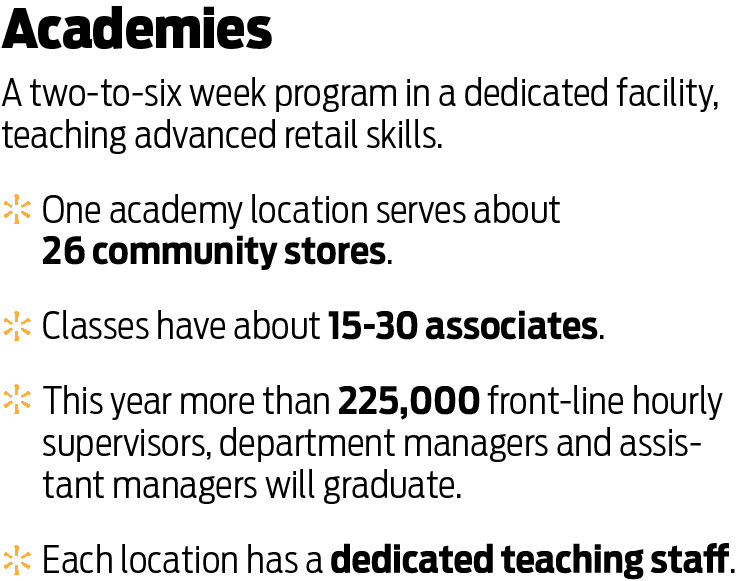 The pharmacy pay project, announced in April, benefits 36,000 Walmart and Sam’s Club pharmacy employees whose wages now top $20 an hour. With a goal of hiring an additional 5,000 pharmacy techs, Walmart introduced a progressive wage model to let technicians add $4 an hour to their base pay over four years. 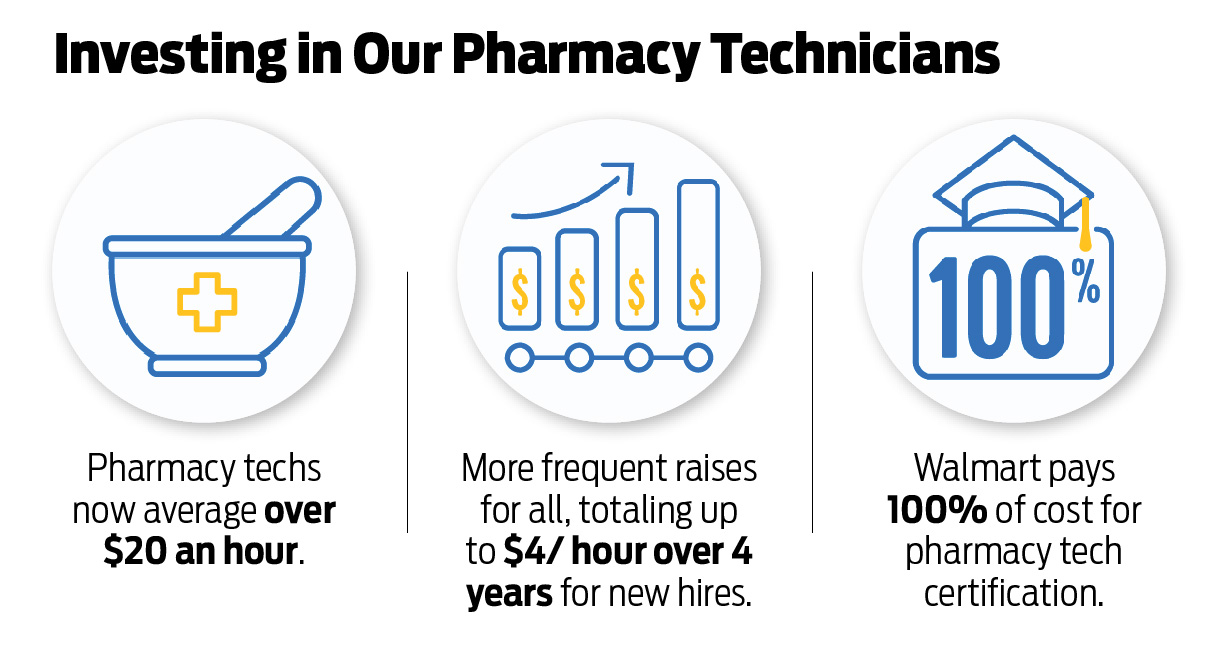 “Like with truck drivers, we are creating additional pathways for pay and career growth by paying our pharmacy techs to earn their certification,” Carter said. Certified techs can make up to $3 an hour more than noncertified peers.

Another goal is to spread the word that Walmart can be a lifetime workplace. “Seventy-five percent of our salaried store, club and supply chain management began their careers as associates, and the average entry-level associate promotes to a role of higher pay and greater responsibility within about seven months,” Carter said.

“We’ve also invested in consistent schedules and paychecks by moving more than two-thirds of our workforce to full-time status. “This means associates know what to expect in their paychecks and can budget accordingly.”

Walmart’s new fast track to store management, College2Career, began this summer for recent college graduates and students within a year of graduation. The classroom training and hands-on experience at stores qualify top performers for new management roles as “emerging coaches” earning at least $65,000 a year. Then, the coaches will join a pipeline to become store managers within about two years — roles that commanded average wages of $210,000 in 2021.

Aleia Marino, 20, is one fresh face of the program, training at a Walmart Supercenter in Hermitage, Pennsylvania. With an associate degree from Eastern Gateway Community College in Youngstown, Ohio, Marino is working on her bachelor’s from the University of Arizona and began the College2Career course in June; she will finish the initial 12-week course next month.

“It has been a ride and a half,” she told Arkansas Business in a Zoom interview Wednesday. “I have been with Walmart for three years now, starting as a cashier when I was 17. All through high school, I wanted to be a teacher, so I started at Walmart to try and pay my way through college. But I ended up loving where I was.”

Personable and “very, very social,” Marino advanced to a digital team leader position and began to see herself as a sort of teacher on the job. “Everything at Walmart has a teaching aspect, so rather than teaching kids in a classroom, I’m teaching associates to thrive in the business. One thing that’s kept me here has been offering other people the opportunities that Walmart has given to me.”

Marino always thought the pay was good, she said. “Even as a cashier, it was like $15 an hour, and I’ve been blown away by how much Walmart has given me and all the personal goals I’ve been able to meet a lot earlier than I originally thought,” she said. “When I compare myself to others my age, I’m very happy with my pay and I can hardly imagine being 22 years old and potentially making store manager pay. It’s just insane. Walmart has really just guided me in the right direction.”

She said many associates are drawn to the company’s Live Better U program,  which pays for college tuition and books. It initially required a dollar-a-day commitment from employees, but the company dropped that in August, devoting $1 billion over five years to the effort.

“I think it’s very attractive to people who think college is out of reach because they can’t afford it,” Marino said. “Walmart has removed that obstacle from them.”

In March, Walmart launched a program to introduce prospects to the company headquarters in Bentonville, the Home Office Pathway Experience. Over eight weeks, college students in high-demand fields like cybersecurity or merchandising hone their skills at the corporate campus. After graduating, they’re eligible for full-time office roles in Bentonville.

Medical coverage costs $31.40 per two-week pay period, there’s paid time off and a 401(k) program with a 6% company match. Mothers get paid family leave for up to 16 weeks, and an adoption benefit pays associates up to $5,000 per child. “We also help associates save money ... by offering discounts on select Walmart items, cellphone plans and gym memberships,” Carter said.

“These are great benefits to help associates live better.”