A Big Deal for Energy, Tinged Green All Over

The budget reconciliation bill that hurtled toward President Joe Biden’s desk last week is certainly a big deal — a $780 billion commitment to cut the deficit and literally save the world — and by press time it looked to be a done deal.

Sen. Joe Manchin of West Virginia, whose turnaround compromise rescued a chunk of Biden’s Build Back Better plan from last year, let the slim Democratic majority in the Senate thread the needle with what Manchin dubbed the Inflation Reduction Act of 2022. A House vote was expected Friday, after our deadline, with majority Democrats poised to pass it.

The Congressional Budget Office projects a $305 billion reduction in the U.S. deficit by 2031, combating inflation over time but offering little immediate relief. Medicare will start saving money for beneficiaries in 2026, when it is allowed to use its bulk buying power to negotiate better prices with pharmaceutical companies. There’s also the biggest budget boost in IRS history, the largest tax increase on corporations in decades, reinforcements to the Affordable Care Act and many other details affecting just about every American.

But the big headline is America’s largest investment ever in green energy and climate change abatement, at least $370 billion over 10 years. The plan offers clean energy tax credits, efficiency rewards and outlays toward carbon recapture and home electrification. In all, $260 billion is earmarked for renewable power projects, and under the bill greenhouse gas emissions are expected to fall 41% below 2005 levels as opposed to 26% below that level.

Tax credits for zero-carbon power plants, incentives of up to $7,500 for buying electric vehicles and $9 billion in rebates for Americans to install energy-efficient electric appliances are included, along with 10 years of consumer tax credits to make heat pumps and rooftop solar more affordable. 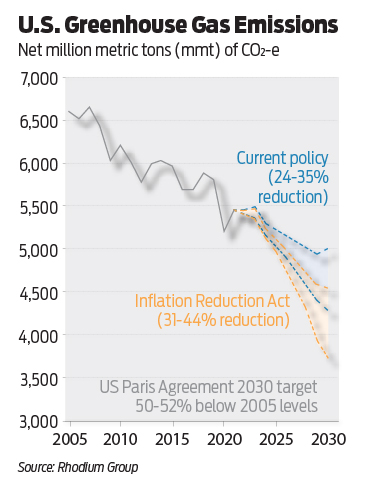 About $60 million is devoted to domestic clean energy manufacturing, including tax credits for making solar panels, wind turbines and batteries, as well as producing critical minerals, a possible boon to the push for a new lithium extraction industry in Arkansas.

Oil and gas companies will face penalties for excess methane leakage, and $27 billion will fund a “green bank” for clean energy projects focused on disadvantaged areas. Republicans painted the legislation as a huge tax-and-spend boondoggle unlikely to abate inflation. Critics on the left say it does far too little.

But former Vice President Al Gore, like most climate warriors, sees a real breakthrough. “No deal is perfect and we need many more actions to solve the climate crisis,” Gore said. “Yet this bill is a long overdue and necessary step to ensure the U.S. takes decisive action … that helps our economy” while providing new jobs and a sense of global leadership.

“Much of these projects will source U.S. steel, which will bode well for our friends in Mississippi County,” Waldrip said, referring to the mills of Nucor, Big River Steel and U.S. Steel. “Models estimate that this package will drive down electricity prices by 5% to 7%, potentially generating hundreds of dollars in cost savings for Arkansas families annually.”

She said extending the income tax credit for renewable energy was just one component of a diversified energy portfolio designed to bolster energy security. “In addition to billions in conservation incentives the Inflation Reduction Act provides to farmers, rural communities will also benefit from quality jobs.”